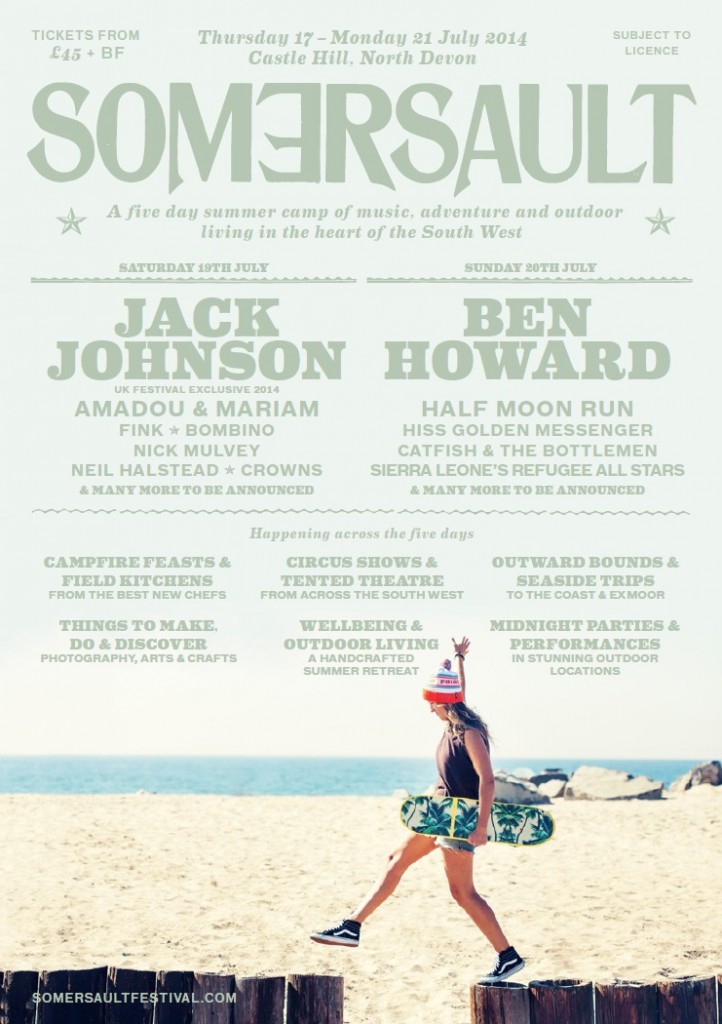 ‘I love the UK.  I love surfing.  So playing a show in the South West is the perfect situation.  Somersault sounds like the perfect festival’

A stellar line up joins the two headliners over the weekend.

Saturday will see the Grammy Award nominated musical duo, Amadou & Mariam, take to the stage – bringing their unique Afro-Blues sound to the weekend. Returning to his South West roots for Somersault is English singer, songwriter and DJ, Fink, whose soulful, chilled out sounds are a perfect match for Somersault.  Also playing on Saturday is Omara ‘Bombino’ Moctar originally from Tidene in Niger, who has been described as a “guitar hero” by Rolling Stone magazine.  Bombino’s debut album, “Nomad”, released last year reached number one in the Billboard World Music Chart.

Nick Mulvey, named on the BBC Sound of 2014 long list, will no doubt be conducting mass sing-alongs of his track ‘Cucurucu’ that is currently playlisted at Radio 1, 6 Music and Radio 2.  Crowns, whose music is partly inspired by traditional Cornish songs will bring an authentic South West sound to Saturday’s proceedings.  Another surfer to add to the line up is Neil Halstead, founding member of the recently reformed Slowdive. Halstead’s last two albums were released on headliner Jack Johnson’s label, Brushfire Records.

Canadian band, Half Moon Run, who’s single Full Circle is currently A listed at Radio 1 and has received over 2.5million views on youtube, will take to the stage on Sunday. Alongside them will be Welsh indie four piece Catfish and the Bottlemen bringing their explosive rock n roll to the stage.

Hiss Golden Messenger, travelling in from North Carolina for Sunday’s line up, will be entertaining the festival-goers with their eclectic mix of folk, country, dub, country soul and jazz music.  Sierra Leone’s Refugee All Stars, formed by a group of refugees displaced to Guinea during the Sierra Leone civil war, are sure to be a hit with their special brand of reggae.

Despite the impressive line up, Somersault is not just a music festival. There will be a wide variety of activities on offer for everyone to get involved in. Festival goers will have the chance to learn to surf, kayak, paddle board, attend yoga classes, watch theatre and much much more.  There will also be an array of culinary treats on offer including fireside feasts and pop up restaurants … more information to be revealed soon.

Full line up as follows: