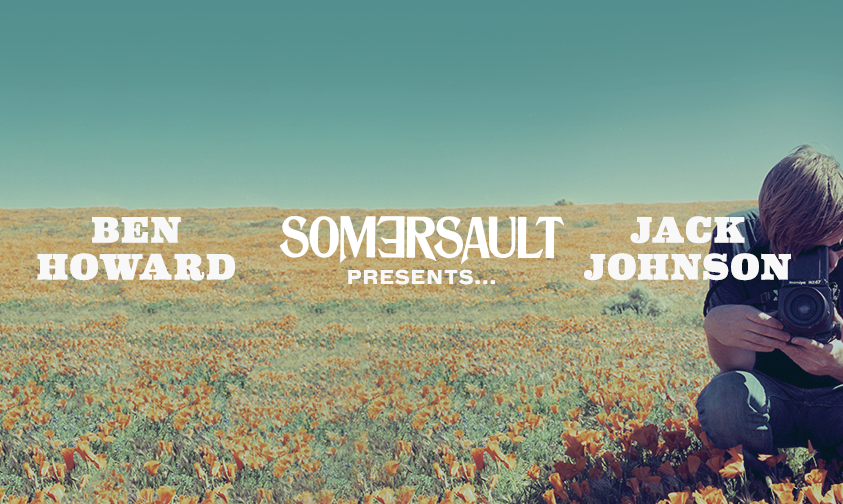 The world class Jack Johnson and Devon’s very own Ben Howard will headline, with Somersault being Jack Johnson’s only UK festival performance in 2014.  A stellar support line up including more world-renowned artists will be announced very soon….

Somersault is not just another music festival.  It will offer every ounce of what a summer holiday was once about, from under-canvas encampments of crafts and culture to fun-fuelled feasts and fireside festivities by night.  Campers can enjoy surf trips to nearby Woolacombe, as well as trying their hands at handplaning, coasteering, wind surfing, kite surfing, sailing, canoeing and paddleboarding. Back on dry land, activities include horse riding, trekking, moor running and mountain biking on nearby Exmoor, plus falconry, archery, yoga, circus skills and more.

A 2014 UK festival exclusive, Jack Johnson, the musician, surfer and environmental/social campaigner – whose six studio albums and two live albums have sold over 20 million copies worldwide – is Somersault’s first patron. Johnson, who has always redirected the spotlight onto issues important to him (including the Kokua Hawaii Foundation,Johnson Ohana Charitable Foundation and 1% for the Planet), will continue to collaborate with hand chosen community groups worldwide to support sustainable local food systems and  plastic free initiatives through his All At Once campaign.

‘I love the UK.  I love surfing.  So playing a show in the South West is the perfect situation.  Somersault sounds like the perfect festival’

Ben Howard’s headline set on the Sunday will see Ben returning to his South West roots to play what is sure to be a memorable homecoming gig. Last year saw Ben win not one but two BRIT Awards as well as playing the Pyramid Stage at Glastonbury.

‘We wanted to offer a completely new kind of summer festival experience – a five day summer camp that allows people to break out into the surrounding landscape and no longer be hemmed in to one event site. It’s been a painstaking planning process but we are delighted to announce two world-class headliners in our inaugural year both of whom supported the concept right from the start. There’s an amazing line-up of support artists still to announce and we can’t wait to see the theatre, food and arts programme unfold over the next few months. For anyone wanting to combine a long weekend to the South West and a different kind of festival experience Somersault is the answer. We hope this will prove a landmark new show for the region that adds something special to the amazing range of activities already taking place across Cornwall and Devon each summer.’

Somersault Festival’s nominated charity is Surfers Against Sewage.  With Jack Johnson and Ben Howard as headliners, both known for their support of environmental education, and the themes of the festival, there couldn’t be a stronger synergy between the festival and the UK charity. Surfers Against Sewage (SAS) is an environmental charity protecting the UK’s oceans, waves and beaches for all to enjoy safely and sustainably, via community action, campaigning, volunteering, conservation, education and scientific research.

Further details will be announced in due course.