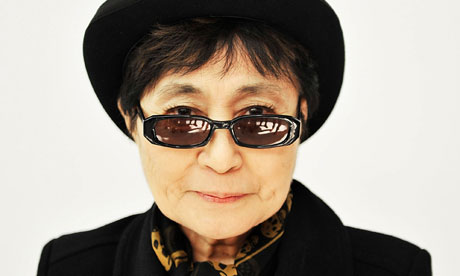 YOKO ONO STARTS CELEBRATIONS FOR HER 80TH BIRTHDAY WITH A LIVE SHOW WITH PLASTIC ONO BAND AT VOLKSBUHNE, BERLIN ON FEBRUARY 17, THE NIGHT BEFORE HER BIRTHDAY ON FEBRUARY 18

One of the most daring and influential artists of our time, Yoko Ono, will be celebrating her eightieth birthday with a music performance at the legendary Volksbühne in Berlin on Sunday, February 17. YOKO ONO PLASTIC ONO BAND will be led by her son, Sean Ono Lennon, who collaborated with Yoko on her 2009 critically-acclaimed record, Between My Head And The Sky. The album received 4 & 5-star rave reviews from Mojo, Q, Uncut, NME, Rolling Stone, Spin & many more, and was picked among Mojo Magazine’s top albums of the year. Additionally, Mojo honored Yoko with a Lifetime Achievement Award and she received the Golden Lion Lifetime Achievement Award at The Venice Biennale.

Over the past few years, Ono has achieved a record string of nine consecutive #1 hits on the Billboard dance charts. In September, Ono released the improvisational YOKOKIMTHURSTON album with Thurston Moore and Kim Gordon of Sonic Youth. Other recent  collaborations have included recordings and performances with Eric Clapton, Lady Gaga, RZA, Antony, Ornette Coleman, the Flaming Lips, the Pet Shop Boys, Mark Ronson and tUnE-yArDs.

Yoko Ono’s retrospective, HALF-A-WIND SHOW opens at the Schirn Kuntshalle in Frankfurt on February 15, and will tour to major museums across Denmark, Austria and Spain in 2013 and 2014. Numerous projects are slated for 2013 including the reissue of her  albums from 1968-1985, a career-spanning art book, Infinite Universe At Dawn highlighting six decades of her work, and the curation of the 2013 Meltdown Festival at Southbank Centre in London in June.