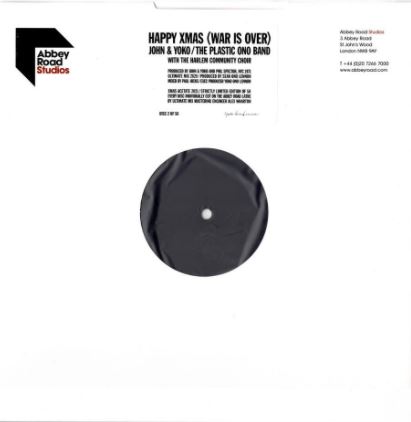 TO CELEBRATE THE 50TH ANNIVERSARY OF THE SONG

25 OF THE EDITION WILL GO TO HAND-PICKED MUSIC CHARITIES AND NON-PROFIT ORGANISATIONS FOR THEIR FUND-RAISING.

THE OTHER HALF WILL BE AVAILABLE AT RECORD SHOPS ACROSS THE UK, LAUNCHING AT TIM BURGESS’S VINYL ADVENTURES RECORD FAIR IN MANCHESTER.

THE ICONIC TRACK WAS FIRST RELEASED FIFTY YEARS AGO.

Yoko Ono and Sean Ono Lennon have made available an extremely rare and collectable strictly Limited Edition of 50 vinyl acetates of John Lennon & Yoko Ono’s iconic single ‘Happy Xmas (War is Over)’ (with The Plastic Ono Band and The Harlem Commmunity Choir) which will be released on December 5, 2021 to celebrate the 50th anniversary of the original recording and release in 1971.

The first twenty-five of these vinyl acetates will be given to a selection of hand-picked music charities, non-profits and grassroots organisations undertaking great work across the UK music scene, ranging from venues and music education programmes to initiatives promoting gender equality, music therapy and more. Yoko and Sean have gifted these specially produced artefacts to allow each organisation to sell or auction the rare, highly collectable items to raise funding.

The other half of these vinyl acetates will be available at select record shops across the UK, in cities including Liverpool, Manchester, Leeds, Edinburgh, Dundee, Belfast, London and more. The launch will take place at Tim Burgess’ Vinyl Adventures Record Fair in Manchester on December 5, with one edition available at his stall.

In a note accompanying each record, Sean Ono Lennon says:

‘Happy Xmas. This is one of only fifty Limited Edition acetates hand-cut at Abbey Road, it’s yours – to sell, auction, raise money to help your business or your favourite charity or to fund your Xmas party – to spread Xmas cheer. We’d love to see the journey these acetates take, and the goodwill that they spread – please use the hashtag #HappyXmasVinyl and we’ll retweet and share their progress on Social Media to help promote the good causes and good vibes.’

The 50 one-sided 12” acetates were hand-cut on the lathe at the legendary Abbey Road Studios by mastering engineer Alex Wharton. These rare vinyl acetates are the 2020 ‘Ultimate Mix’, produced by Sean Ono Lennon, mixed by Paul Hicks and executive produced by Yoko Ono Lennon.

Each edition is stickered and numbered out of 50 and includes a machine printed signature from Yoko, making them incredibly collectable.

Originally released in December 1971 ‘Happy Xmas (War is Over)’ has evolved to become an iconic global Christmas classic and is now one of the most played and popular Christmas songs of all time. The song’s WAR IS OVER! (IF YOU WANT IT) chorus echoes an ongoing campaign of activism by John & Yoko who also used the title for billboard and flyer campaigns in prominent positions around the world, an initiative Yoko continues to the present day. Find out more at warisover.com.

John Lennon is arguably the greatest songwriter of his generation. As founder and leader of The Beatles and also as a solo artist, Lennon has won seven GRAMMY® Awards, including two Lifetime Achievement Awards, Five BRIT Awards including two Special Awards for Outstanding Contribution to Music, 21 NME Awards, 15 Ivor Novellos and an Oscar (Academy Award). He has been inducted into the Rock and Roll Hall of Fame and the Songwriters Hall of Fame and has a star on the Hollywood Walk of Fame. In 2008, Rolling Stone ranked Lennon in the Top 5 of the magazine’s “100 Greatest Singers Of All Time” list.

Originally from Tokyo, Yoko Ono was the first woman admitted to the philosophy program at Gakushuin University in Tokyo, where she studied for a year before moving to New York, where she studied writing and music at Sarah Lawrence College. Ono became an influential conceptual and performance artist prior to her marriage and artistic partnership with John Lennon. George Macunias, founder of the Fluxus collective, gave Ono her first solo gallery show in 1961. From the 1970s to the 1990s, Ono worked on music, both solo and in collaboration. The Whitney Museum of American Art presented a retrospective of her work in 1989, as did the Japan Society Gallery in 2000, and the Museum of Modern Art in 2015. She received a Golden Lion for Lifetime Achievement at the 2009 Venice Biennale. Yoko Ono lives and works in New York City.

Sean Ono Lennon is a British-Asian-American musician, songwriter, producer, multi-instrumentalist, artist, actor and polymath. He is the son of John Lennon and Yoko Ono and brother to Kyoko Ono and Julian Lennon. He has been a member of Cibo Matto, Ghost of a Saber Tooth Tiger, The Claypool Lennon Delirium, Plastic Ono Band and guested with many other bands. He is a prolific songwriter, film score composer and producer and runs independent record label Chimera Music with partner Charlotte Kemp Muhl.

Further information on the UK charities, non-profits and music organisations receiving the vinyl acetate of ‘Happy Xmas (War is Over)’ below:

We inspire, connect & open doors to the music industry so that underrepresented young talent has an equal chance to realise their creative potential.

Raising money from the music industry for the most effective environmental charities. Co-Founded by Brian Eno.

Northern Ireland emerging music festival, established from a need to support and develop homegrown artists at a time when a music industry in Northern Ireland was barely in its infancy. Over the years it expanded throughout the creative landscape delivering a host of creative and practical projects and initiatives for the rural area of Mid Ulster.

An independent UK charity that provides help, support and opportunity for professional musicians of all genres and career stages.

Launched in February 2009, In Harmony Liverpool uses orchestral music making to improve the life chances of children by increasing confidence, wellbeing, skills and resilience, enhanced by opportunities to travel, learn, perform and collaborate with professional musicians, international artists and other young people.

A non-profit. Our events combine new wave Latin and global live acts, top DJs and performances to create a unique dance floor led, festival atmosphere. Our programming reflects the diversity and passion of our audiences.

Established in 1995, we are an independent, not-for-profit organisation and registered charity. We provide an eclectic mix of music and education services to the entire community in Northern Ireland. We are dedicated to ideals of innovation and originality, championing new developments in music, inspiring and nurturing musical talents, and providing opportunities for everyone to get involved in music.

As the UK’s largest music therapy charity, we use music to enrich the lives of people with life-limiting illness, disabilities or feelings of isolation.

A collection of music creators and industry professionals who identify as women, committed to achieving a level playing field for women, pushing for gender equality.

A charity based in Shawlands, in the southside of Glasgow, providing a wide range of free and affordable music workshops for people of all ages and abilities.

As the leading Music Therapy company in the North West and Cheshire, we provide a range of services visiting hospitals, care homes, local authorities, schools and private home settings.

Creating a world where every young person can make, learn and earn in music, whatever their background or goal.