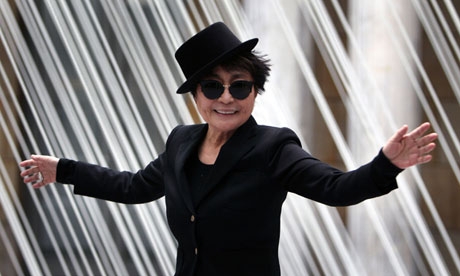 Sunday February, 17 —  One of the most daring and influential artists of our time, Yoko Ono, celebrated her eightieth birthday with a sold-out performance to an energetic and hugely responsive crowd at the legendary Volksbühne in Berlin. YOKO ONO PLASTIC ONO BAND was led by her son, Sean Ono Lennon, who collaborated with Yoko on her critically-acclaimed 2009 record, Between My Head And The Sky.

Waiting For The D Train

Between My Head And The Sky

Give Peace A Chance

Earlier in the week, on February 15, Yoko Ono’s retrospective, HALF-A-WIND SHOW opened at the Schirn Kuntshalle in Frankfurt and will tour to major museums across Denmark, Austria and Spain in 2013 and 2014. Numerous projects are slated for 2013 including the reissue of Ono’s albums from 1968-1985, a career-spanning art book, Infinite Universe At Dawn highlighting six decades of her work, and the curation of the 2013 Meltdown Festival at Southbank Centre in London in June.