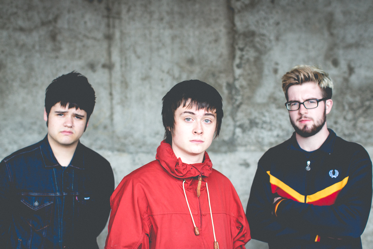 THE BAND REVEAL THE FIRST SINGLE FROM THE EP, ‘BOMB SCARE’ OUT TODAY

“They’re one of the best new live bands I’ve seen in a long time…they’re raucous, outspoken, fun, loud” – The Independent

TOUTS will release their highly-anticipated second EP ‘LIT’ on November 10th via Hometown Records. The four track EP will include the lead single ‘Bomb Scare’, out now.

Of the single, lead singer Matthew Crossan says: “The song was written around the time when the news was covering the injustice in America, when Keith Scott was ‘shot down in Charlotte’ for no apparent reason. The song is also about the on-going refugee crisis, it’s morally important for people to help people, and you never know when you yourself may need help.”

Punky, powerful and gritty with political punchiness, ‘Bomb Scare’ is an anthem for the youth of today and a comment on the world we currently live in. Newcomers ‘TOUTS’ have something worth saying… Their debut EP, ‘Sickening and Deplorable’, received an incredible stream of support from industry tastemakers including over 20 Plays on Radio 1, an appearance in Radio 1’s specialist chart and plays by Zane Lowe on Beats 1. The band were also invited in for a Huw Stephens session before he’d played them on his show as he was so impressed with the debut single, which led to them being asked to headline the BBC Introducing Stage and Reading and Leeds Festival this year.

Despite only releasing their debut EP earlier this year, the band are already selling out venues across London & their hometown of Derry. They have landed some impressive gigs, including support for Kasabian, Liam Gallagher and a slot performing live on Radio 1 at the Huw Stephens Maida Vale Session. The band were also picked to play sets at Reading and Leeds festival this summer with Metro calling the band “a refreshing change from the indie that dominates the scene.”

TOUTS will be embarking on a 15-date UK tour, starting September 27th in Bath. For full UK tour dates, see below: