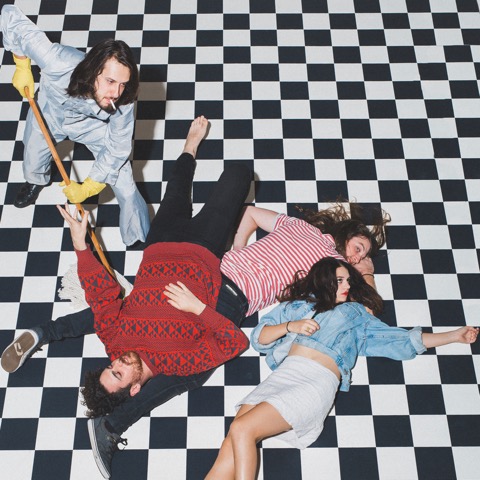 “With every stab of ’90s-nodding grunge and fuzz-drenched retro nod, the group sound like they’re surging ahead instead of looking back” – NME

“Tired Lion manage to stand out from the crowd” – Metro

Tired Lion have today revealed the video for their single ‘Fresh’, the new single taken from the band’s debut album, ‘Dumb Days‘, which was released last month via Dew Process/Islands Records.

“The video is an insight into our tour life, champagne, KFC, hating each other, carrying on – all the little stuff that nobody sees.”

Much like the album it appears on, ‘Fresh’ has gradually evolved over the years to finally become the huge track it is today. Utilising the tried-and-tested, quiet vs loud rock dynamic, ‘Fresh’ is a song the band has been playing live for much of their career and is a solid fan favourite. Today though, the song finally gets cut to tape and stands as one of the most intensely beautiful and brilliantly heavy tracks on ‘Dumb Days’.

Speaking about ‘Fresh,’ Tired Lion songwriter and lead singer Sophie Hopes explains it’s a song that she penned in the aftermath of a break-up and at the end of one of the group’s first international tours, during a period when the band, as a collective, was coming to terms with their lives entering a new phase.

“It’s sort of a goodbye tune, saluting the old you or the relationship that may have been holding you back, in order to move forward,” says Hopes. “At the time [of writing it] I felt like the whole band was at a point where we all had the realisation we weren’t a bunch of kids anymore. We were experiencing real life issues and coming to terms with adulthood.”

She adds that the song’s refrain, “Disconnect my youth”, is the key line that sums it up perfectly. “It’s about trying to let go of your inner child so you can eventually grow up, but it’s an exceedingly sad process.”

Since winning the Unearthed J Award in 2015, expectations have steadily risen for Tired Lion as they’ve delivered belting singles, including ‘Not My Friends,’ and ‘Agoraphobia’ in 2016, and of course this year’s ‘Cinderella Dracula’.