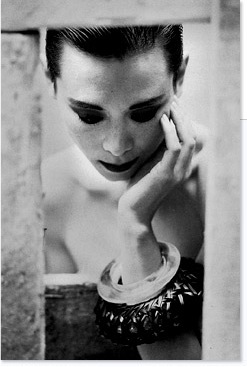 Tina Chow was a beauty. Her breathtaking looks and singular style were at the core of the fashion world of the ’70’s and ’80’s and also helped define it.

She was revered by everyone yet, whilst living a seemingly gilded life, was somehow also the antithesis of much of the glitz of the times. Her androgynous beauty – side parted hair cut in a barber’s shop and her uniform of white t shirt, grey cardigan and simple flat fronted trousers was so minimalist that she could be said to have helped define the term in fashion.

Yet Chow was also a collector of the highest quality couture, amassing a collection of hundreds of museum quality pieces in her short life. Her collection included examples of the most amazing artistry by Fortuny, Balenciaga, Vionnet, Chanel, Dior, Lanvin and Schiaparelli as well as more contemporary designers like Miyake.

Many of these treasures are collected together in the beautiful book Flair published by Rizzoli in 1992, the year Tina Chow died from AIDS. In April that year Vanity Fair published an incredibly moving portrait of Chow by Maureen Orth which showed the dignified way she approached her death; retreating from her gilded life at the heart of fashion to the California coastline, Chow began to sculpt in wood whilst continuing to design her celebrated jewellery. Her whole remarkable story can be read here