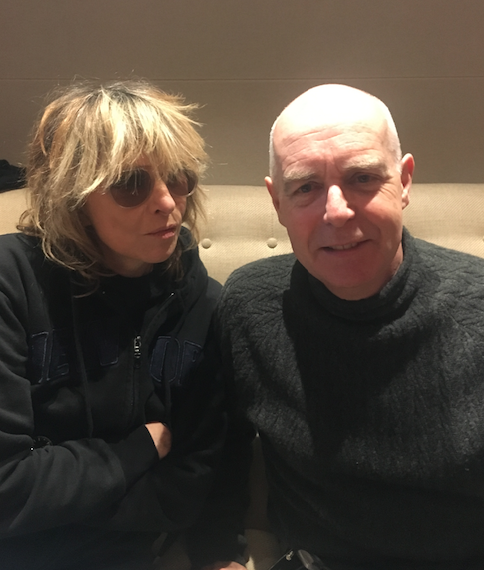 “Joyous, guitar-charged new-wave pop-rock that served as a thrilling reminder of Hynde’s extraordinary talents.” 5* The Telegraph

The Pretenders have revealed a new version of ‘Let’s Get Lost’ featuring guest vocalist Neil Tennant. Chrissie Hynde and Neil Tennant’s unmistakably poignant vocals combine beautifully on the track which is one of the stand-out songs on The Pretenders album. The track is released as part of a double a-side single with ‘Gotta Wait’.

Chrissie Hynde invited Neil Tennant to perform on ‘Let’s Get Lost’ after a conversation between the pair backstage at a Pretenders gig in Austin, Texas, during which Neil told Chrissie that the track should be her next single. Chrissie said she would release it on the condition that he sang vocals with her; subsequently, when both artists were back in London they went in to Sarm Studios where Neil added his vocals to the track. This collaboration continues a working relationship that started when Chrissie performed ‘Four Songs In A Minor’ with Pet Shop Boys and the BBC Concert Orchestra at their Proms show at London’s Royal Albert Hall in 2014

Neil Tennant said today: “I love Chrissie’s voice and I love this song. It was a pleasure to sing and it’s a thrill to be part of a duet with Chrissie.”

The Pretenders will embark on a headline tour of the UK later this year following unprecedented demand for their Royal Albert Hall show on April 10th. “Chrissie Hynde still answers to no one and it’s a glorious sound.” – 4* Q Magazine

‘Alone’ is out now and is the first Pretenders album for eight years. Chrissie Hynde recorded the album in Nashville with Dan Auerbach, from The Black Keys, who stood as captain, producer and multi-instrumentalist on the record, an album which sees Chrissie at her searingly honest, most incisive best. ‘Alone’ is available on CD/LP/Digital.