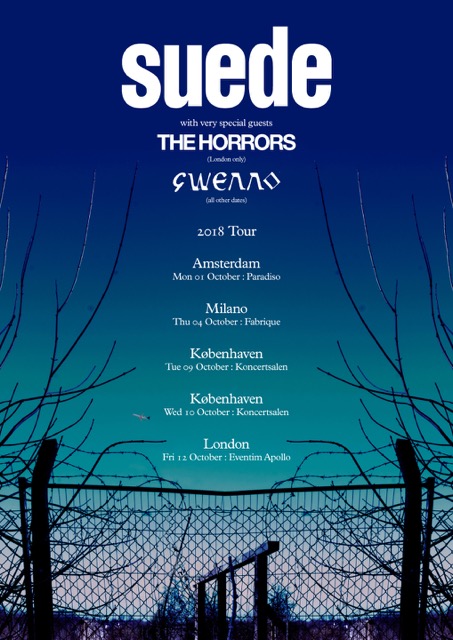 Suede have today announced their first run of European shows for 2018. Beginning on 1st October in Amsterdam, the dates include shows in Milan and Copenhagen, as well as a performance at London’s Eventim Apollo on 12th October. The first batch of dates is listed below – more European dates will be announced in the coming weeks.

Suede will be supported by Gwenno on all dates announced so far, excluding their London show which will see The Horrors perform as support act.

Tickets will go on general sale on Friday May 11th, but fans can gain early access to a ticket pre-sale if they pre-order new album The Blue Hour from the band’s official store via the Suede website, suede.co.uk

Suede recently announced their new album The Blue Hour, out 21st September. It is the final part of the triptych of albums recorded by the band since they reformed and released 2013’s Bloodsports. The record is also complemented by some of the subject matter of Brett Anderson’s recent memoir ‘Coal Black Mornings’.

Suede’s previous studio album Night Thoughts was released to great critical acclaim in 2016. The record went on to chart at number 6 in the UK album charts. The groundbreaking live presentation of the album was accompanied by a feature film directed by Roger Sargent.