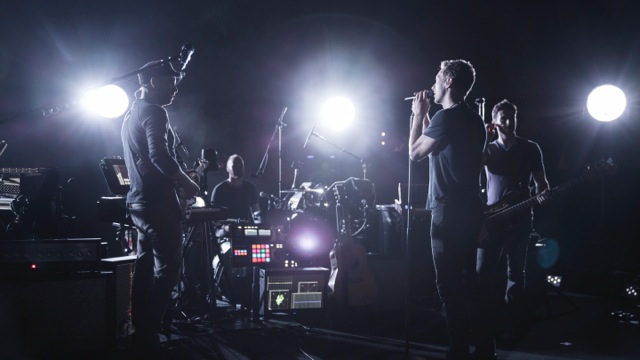 Sky Arts announces that Coldplay: Ghost Stories the film, an exclusive concert featuring the band performing their forthcoming album alongside several classics, will receive its UK television premiere on Monday 19th May at 9.30pm on Sky Arts 1 HD.

Coldplay: Ghost Stories the film will broadcast on Sky Arts the same day as the band’s eagerly anticipated sixth album, Ghost Stories, is released worldwide.  Filmed by Grammy-nominated director Paul Dugdale (Adele, Rolling Stones), the film was recorded in a custom-built amphitheatre in front of an audience of 800 fans. The show blends a unique in-the-round performance from the band with cinematic vignettes and immersive 360-degree projections. The broadcast will include performances of all nine tracks on the new album: Always in My Head, Magic, Ink, True Love, Midnight, Another’s Arms, Oceans, A Sky Full of Stars, O; and a collection of the band’s most memorable songs including Clocks, Viva La Vida and Paradise.

Chris Martin, Guy Berryman, Jonny Buckland and Will Champion will also feature in an exclusive interview programme, Coldplay: Making Ghost Stories (9pm), which provides insight into the creation of the album and the recording of the show. The programme will form part of a night of programming on Sky Arts dedicated to the band. The night will include the Ghost Stories concert; Coldplay: Live 2012 from the Mylo Xyloto Tour (7.45pm), How We Saw The World Pt. 1 filmed in Toronto during 2006 (6.30pm) and Coldplay Live in Sydney, from the band’s 2003 year-long world tour (5.30pm).

Philip Edgar-Jones, Director, Sky Arts, comments:  “Coldplay’s sound is iconic and their songs and lyrics are captivating. The band’s passion resonates with millions of fans so it’s easy to see why Coldplay’s music has defined a generation. It’s a thrill for Sky Arts to be able to give its customers this exclusive first look at the band performing all of the tracks from their new album. As a fan I got a sneak peek at the show and can report that I was utterly captivated.”