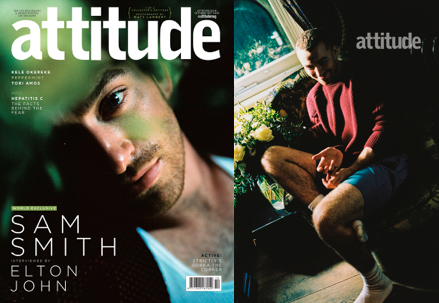 AHEAD OF THE RELEASE OF SAM’S EAGERLY ANTICIPATED NEW ALBUM

In a world exclusive, Sir Elton John talks to Sam Smith for the October issue of Attitude Magazine – Sam’s first print interview ahead of the release of his second album and new single, ‘Too Good at Goodbyes’.

In the interview, which took place at Elton John’s home in the South of France, the music legend talks openly with the phenomenally successful solo star about a variety of topics including music, fame, sex, coming out, gay culture, Elton’s clubbing days in 1970s America and recording songs in the shower!

In the interview, Elton describes Sam’s new album as “personal” and “warm and sexy” while Sam reveals the creative struggles he encountered: “There was a period, when making the record, that I was in a really bad place. I got dumped, which wasn’t very nice. Writing music about that kind of thing is normally like therapy for me, but when I got dumped this time round I just couldn’t write for about two months. My team had to force me to get into the studio, because I almost felt as if I didn’t want to do it any more. So, there were moments on there where it got a bit intense and I started to lose myself.”

Elton asks Sam about writing the theme song, ‘Writing’s on the Wall’, for the James Bond film, ‘Spectre’. Elton also describes his relationship with fellow musician Rod Stewart and their friendly rivalry throughout their careers.

Sam’s 2014 debut album, ‘In the Lonely Hour’, has sold more than 12 million copies worldwide. The James Bond theme, ‘Writing’s on the Wall’, is the only theme song from the film franchise to hit the Number 1 spot in the UK and won Sam an Oscar for ‘Best Original Song’.

Says Darren Styles, publisher of Attitude: “Sam Smith’s debut was extraordinary on every level, both musically and in terms of reach and reaction. He is a phenomenon in our community and, faced with the prospect of a global exclusive interview, we needed an interviewer of status who’d walked the same path. It could only be Elton John, who very graciously allowed us to crash his holiday home in Nice as he was as keen to hear the new songs as the rest of us. And only Attitude can tell you how that went…”

The October issue of Attitude Magazine is out on Thursday 14th September, available from all good newsagents or to download to phone or tablet from www.pocketmags.com/attitude

Publication of the attached images and quotes must credit: Attitude Magazine October Issue, on sale now.

These images may only be used to accompany editorial relating to the Attitude cover story in this month’s issue.