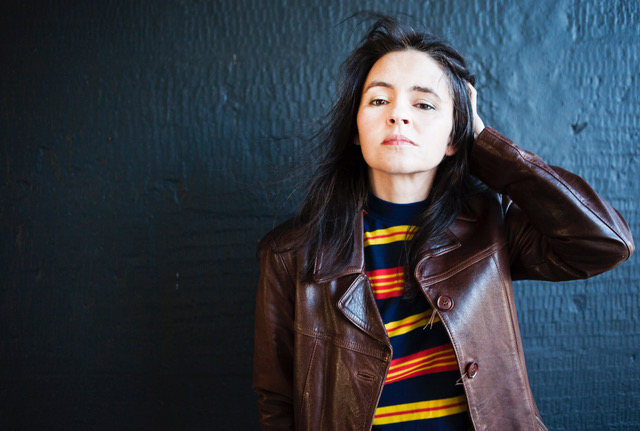 LONGLIST TO BE REVEALED AT INTIMATE GLASGOW GIG

On Wednesday 1st August, the Scottish Album of the Year (SAY) Award 2018 Longlist will be exclusively revealed in front of a live audience at Glasgow’s renowned King Tut’s Wah Wah Hut.

‘Live at the Longlist’ will see performances from previously Longlisted and Shortlisted artists, including a special collaborative set from Stina Tweeddale of Honeyblood and Carla J. Easton of TeenCanteen, as well as a live performance from Emma Pollock (pictured above), whose album ‘In Search of Harperfield’ was shortlisted for The SAY Award in 2016. Emma’s contribution to music in Scotland cannot be overstated, as both a founding member of The Delgados and Chemikal Underground Records, a member of The Burns Unit, and an acclaimed solo artist.

Journalist and broadcaster Nicola Meighan will reveal the 20 outstanding Scottish albums which will make up The SAY Award Longlist for 2018, and following the announcement, a cinematic and expansive DJ set from Mogwai’s Stuart Braithwaite will extend the celebration of Scottish music into the late hours. All proceeds from ‘Live at the Longlist’ will be donated to Help Musicians Scotland, The SAY Award’s charity partner for 2018.

In keeping with the authentic grassroot principles which drive the Award, this means that music fans will be the first to hear which albums are in the running for the annual £20,000 prize, and the coveted title of Scottish Album of the Year 2018.

A record number of 253 eligible albums were submitted for this year’s SAY Award, and all are available to view and stream at sayaward.com. It is now the task of 100 impartial ‘Nominators’, chosen for their specialisms in sectors including journalism, broadcast and radio, music retail and live music venues, to consider the titles from The SAY Award’s Eligible Albums. Each Nominator lists their five favourite albums, ranking them in order of preference, and Nominators cannot have a commercial interest in any of the albums being discussed. A score is assigned to each title in a Nominator’s Top 5, and once all 100 are collated, the 20 highest scoring albums will make up The SAY Award Longlist for 2018.

Robert Kilpatrick, General Manager at the Scottish Music Industry Association (SMIA) who produce The SAY Award, said: “The announcement of The Longlist is without doubt the most exciting part of The SAY Award campaign. Much more than just a list of 20 great albums, The Longlist is the product of an extraordinary nationwide consultation, where 100 impartial Nominators working across the music industry democratically select the 20 most outstanding Scottish records of the last year. I think this process is what makes being Longlisted really special and valued, and what makes people really want to listen to these great records.

“Last year we introduced ‘Live at the Longlist’ to allow artists, industry and music fans to all come together to celebrate the incredible strength and diversity of our country’s recorded output. This year we’re delighted to be hosting the event at Glasgow’s much loved King Tut’s Wah Wah Hut, with a fantastic bill of previously Shortlisted and Longlisted acts, with Nicola Meighan making the exclusive announcement. The event is raising money for our charity partner Help Musicians Scotland, who do such important and essential work supporting the physical and mental wellbeing of musicians. Join us for what will be an incredibly special night for Scottish music and culture.”

Councillor Lisa-Marie Hughes, Renfrewshire Council’s cultural spokesperson, added: “The Scottish Album of the Year Award is one of Scottish music’s biggest nights of the year and we are thrilled to be welcoming it back to Paisley Town Hall for a third year in a row. Being the home of an event like this has really helped establish our place as a key destination on Scotland’s major events map. The Longlist announcement gig has a great line-up and like all music fans I am really excited to hear which 20 albums have made the list this year.”

Following an absorbing promotional campaign, The Longlist will be further whittled down to a Shortlist of 10 albums, one of which will be chosen by the public during a 72-hour online vote and 9 chosen by judges. The Shortlist will be announced on Thursday 23rd August, with the Award Ceremony then taking place on Thursday 6th September in the surroundings of Paisley’s elegant Town Hall with support from Renfrewshire Council.

Previous winners of The SAY Award include Sacred Paws (2017), Young Fathers (2014), Kathryn Joseph (2015) and Anna Meredith (2016), who since winning the prize has been campaigning for greater female representation in the industry, and whose compositions will feature in this year’s BBC Proms.

Launched by the Scottish Music Industry Association (SMIA) in 2012 with instrumental support from Creative Scotland, The SAY Award has been key to showcasing Scotland’s wealth of musical talent on a global scale. Wielding one of the UK’s most lucrative prize funds, The SAY Award champions the extraordinary strength and diversity of Scotland’s musical landscape.

Tickets for ‘Live at the Longlist’ are on sale now and are available at sayaward.com. All proceeds from the event will be donated to Help Musicians Scotland, The SAY Award’s charity partner for 2018.

Keep up to date with The SAY Award on Twitter @SAYaward and on Facebook: facebook.com/SAYaward and use hashtags #SAYaward #SAYlonglist18

The SAY Award is a prestigious and exciting arts prize produced by the Scottish Music Industry Association (SMIA) and supported byCreative Scotland, Renfrewshire Council, Paisley.is,  TicketWeb, PPL and Help Musicians Scotland (Charity Partner). Boasting a lucrative £20,000 prize for the winner and nine runner-up prizes of £1,000 each, the award celebrates, promotes and rewards the most outstanding Scottish albums released each year.

The Scottish Music Industry Association (SMIA) is a membership organisation and innovation agency which exists to represent and develop the Scottish music industry. With a sharp focus on common rather than competing interests; a commitment to communicate and cooperate across all areas of the industry and, above all, a determination to deliver services, projects and a programme of events that are both meaningful and of benefit, the SMIA is inclusive, positive and progressive; meeting need, realising potential and encouraging ambition.

Paisley.is Our new destination brand, Paisley.is, will showcase everything that makes Paisley a great place to live, invest and visit. The new destination brand was co-created with local people and businesses across Renfrewshire and sparked a global conversation that reached 170,000 people. The new site reflects what the people of Renfrewshire told us Paisley is – bold, friendly, honest, good fun, together and proud.

Backed up by a new website (www.paisley.is) and social media presence the brand will signpost to everything we want the world to know about Paisley and Renfrewshire.

Creative Scotland is the public body that supports the arts, screen and creative industries across all parts of Scotland on behalf of everyone who lives, works or visits here.  We enable people and organisations to work in and experience the arts, screen and creative industries in Scotland by helping others to develop great ideas and bring them to life.  We distribute funding provided by the Scottish Government and the National Lottery.

TicketWeb started in 1995 as small group of music fans who wanted to build a truly DIY ticket site dedicated to shining a light on the freshest new acts. After launching in the U.S., Canada, the UK & Ireland we soon became the go-to ticket seller for independent promoters and venues on both sides of the Atlantic. Two decades later and we’re still proud to be part of that scene but now we also work directly with the artists who fill those venues to make it even easier for real fans to get into their shows.

Find out more at www.ticketweb.uk. TicketWeb – a Ticketmaster company.

PPL Founded in 1934, PPL is the UK music industry’s collective management organisation (CMO) for tens of thousands of performers and record companies.  We license recorded music in the UK when it is played in public (shops, bars, nightclubs, offices etc.) or broadcast (BBC, commercial radio, commercial TV etc.) and ensure that revenue flows back to our members.  These include both independent and major record companies, together with performers ranging from emerging grassroots artists through to established session musicians and influential festival headliners.  PPL’s public performance licensing is now carried out on PPL’s behalf by PPL PRS Ltd, the new joint venture between PPL and PRS for Music.

PPL has a market-leading international collections business, with 87 agreements in place across 41 countries, helping members to maximise their revenue when their repertoire is played overseas.  We collected £212 million in the UK and internationally in 2016 and paid over 92,000 performers and record companies.

Help Musicians Scotland Help Musicians UK is Britain’s leading independent music charity. Since 1921, Help Musicians UK (HMUK) has provided help, support and opportunities to empower musicians at all stages of their lives. The charity works in partnership to transform the music industry through advocacy, campaigning, programmes and targeted investment for all those within it.

In 2018 Help Musicians UK launched a permanent Scottish base to support and empower the Scottish music industry. Help Musicians Scotland aims to reach the entire country, having an impact beyond the central belt into the Highlands, Islands, and borders of Scotland through programmes of support, advice and campaigns. HM Scotland is inclusive of all genres in Scotland and will celebrate the musical heritage and history of Scottish music as well as creating sustainable programmes and funding for the future.