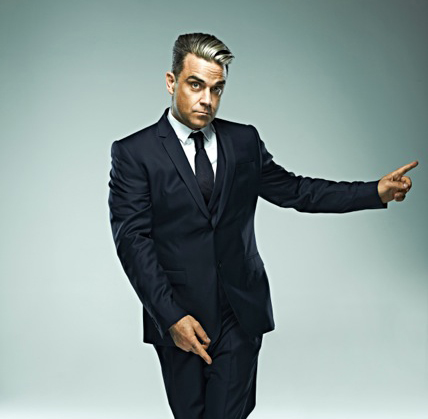 AFTER HIS AMAZING RECENT ONE-OFF PERFORMANCE AT THE LONDON PALLADIUM, ROBBIE WILLIAMS ANNOUNCES A FULL TOUR FOR 2014 CENTRED ROUND HIS NEW ALBUM “SWINGS BOTH WAYS”.

“SWINGS BOTH WAYS LIVE” TICKETS GO ON GENERAL SALE AT 9AM ON FRIDAY DECEMBER 6. THERE WILL BE AN EXCLUSIVE PRE-SALE ON DECEMBER 3 (FOR UK DATES ONLY) FOR AMAZON.CO.UK CUSTOMERS AND A ROBBIEWILLIAMS.COM PRE-SALE FOR ALL UK AND EUROPE DATES ON DECEMBER 4.

Robbie Williams brings his incredible Swing album to concert halls around Europe in 2014 with a tour which starts in Budapest on April 25 and culminates at London’s 02 Arena in July.

The tour follows the ecstatic response to Robbie’s one-off show last week at London’s Palladium where he showcased material from his brand new album “Swings Both Ways” which is released today, November 18.

Tickets for all shows go on general sale at 9am on Friday December 6 from the following outlets:

Pre sale tickets will be available for UK dates exclusively for Amazon.co.uk customers from 9am on Tuesday, 03 December 2013. Priority access to tickets can be gained by ordering the album “Swings Both Ways” from Amazon.co.uk between now and 23.59pm on Sunday, 24 November. Fans who order the album will be emailed a unique code on Monday, 02 December. The Amazon.co.uk pre-sale will be open for 24 hours. No purchase necessary. Click here for full terms and conditions.

Once the Amazon.co.uk pre-sale for UK dates has closed at 8:59am on Wednesday, 04 December 2013, the RobbieWilliams.com pre-sale will open. This pre-sale is for all dates on the Swings Both Ways Live tour both in the UK and in Europe and is powered by Ticketmaster. Those who are signed up to the Robbie Williams mailing list will be sent links and information needed to purchase tickets on the morning of Wednesday, 04 December.

Tickets for the general sale will be available from 9am on Friday, 06 December.