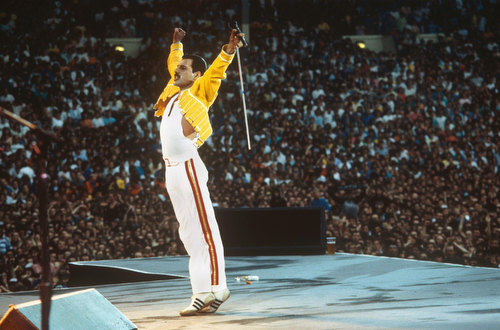 From 5th September (private view) – 5th November 2016, The Richard Young Gallery, Kensington will present ‘A Kind of Magic’, an exhibition showcasing iconic and never before seen photographs of the legendary Freddie Mercury. Documenting sparkling moments in the life of the late musical legend, the exhibition will combine both live concert images and intimate real-life portraits. Entry to the exhibition is free of charge and a limited run of exclusive prints will be available to purchase.

The exhibition, to honour what would have been Freddie’s 70th birthday, will showcase images shot through the lens of celebrity photographer Richard Young, a close friend of Freddie’s. The pair first met properly on New Years Eve in 1978 at a small club in Jermyn Street called Maunkberry. With camera in hand, no expectations and a few hours to kill, this turned out to be one of the best nights of Young’s photographic career:

“First in the door Keith Richards, Ron and Jo Wood, followed by Roger Taylor, Freddie Mercury, Rod Stewart and Britt Ekland. Although I had shot Freddie at various parties around town, this was the evening that cemented our relationship thanks to Queen’s International Publicist, Roxie Mead. Roxie recalls, “The sooner I persuaded the band and their manager to trust Richard the sooner the benefits would be visible across the press. Predictably, the likes of Queen and all artists of that calibre are not quick to bestow trust, but Richard with his irrepressible sunny nature was admitted to the inner circle to record behind-the-scene moments.”

These moments are featured in A Kind of Magic where the insider’s view of Freddie Mercury’s glamorous world will be on display, including extravagant private and public birthday parties; backstage and onstage shots of international concerts from Ibiza, to Budapest, Rio and Barcelona; and music video shoots. Young’s favourite memory was Mercury’s 39th birthday:

“The parties were always wild, full of laughter and unique. When you were in Freddie’s inner circle you would always be given a nickname, mine was Muriel Young. This was after the TV presenter from the 50’s, and Freddie would always say, “Come on Muriel!” I loved it. I felt I was part of his family.”

There were also many times Freddie Mercury invited Young to capture intimate portraits. In October 2013, Young’s candid photograph of Mercury at home was inducted into the National Portrait Gallery. Roxie Mead comments, “In those latter years wherever, whenever, Richard was invariably there and his photographs are a remarkable testament of this remarkable man.” Richard Young’s archive contains an impressive number of images of Freddie Mercury that have only recently been uncovered, and this landmark birthday commemoration is a significant time to exhibit them. “This year Freddie would have been 70, I am a year younger and we are both Virgos. I have the most wonderful memories from my time with Freddie. It was a unique part of rock and roll history, and I feel so honoured that I was able to capture so many wonderful, fun and also poignant times of him over a thirteen-year period. He left us far too early.”

The Richard Young Gallery can be found at –

Gallery Hours are as follows –

For more information about ‘A Kind of Magic’, please contact Murray Chalmers PR:

All images used must credit – Image © Richard Young, ‘A Kind of Magic’ at the Richard Young Gallery, Kensington from 5th Sept – 5th November