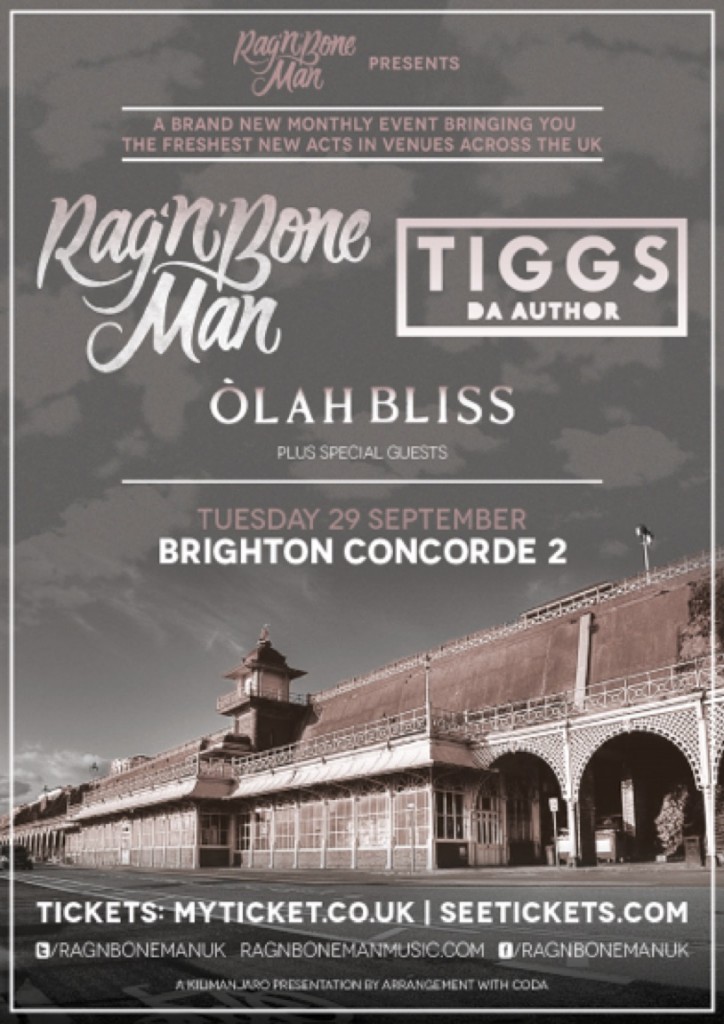 ‘Rag’N’Bone Man presents…’ will be a series of specially curated nights set to take place at various venues across the UK. The first of these will be at the Concorde 2 in Brighton on 29th September, Rag’N’Bone Man’s hometown.

The first event will feature a headline set from Rag’N’Bone Man plus sets from Tiggs Da Author, Olah Bliss and other guests still to be announced.

Says Rag’N’Bone Man: “I’ve always wanted to curate my own night and have the opportunity to bring talented artists together on the same stage.

“Olah Bliss supported me at my London Scala show back in March and I was blown away by her voice and stage presence. Tiggs has a wicked sound, great soulful vocals. I’m looking forward to seeing him live for the first time.

“I’m doing this first show on home turf at the Concorde 2 in Brighton, one of my favourite venues to play. It’s gonna be a wicked night, I can’t wait.”

Rag’N’Bone Man has been blazing a trail across the UK over the summer, performing his unique blend of hip hop and soul, combined with his incredible blues tinted voice, at festivals including The Great Escape, Parklife, Lovebox and Glastonbury. Next weekend will see him perform at Boardmasters festival in Cornwall.

Tickets for ‘Rag’N’Bone Man presents…’ will go on general sale on Tuesday 4th August and are available from myticket.co.uk or seetickets.com

Olah Bliss
London based Olah bliss recently released her debut EP ’13:20,’  showcasing her experimental soul with music that is both majestic and delicate.