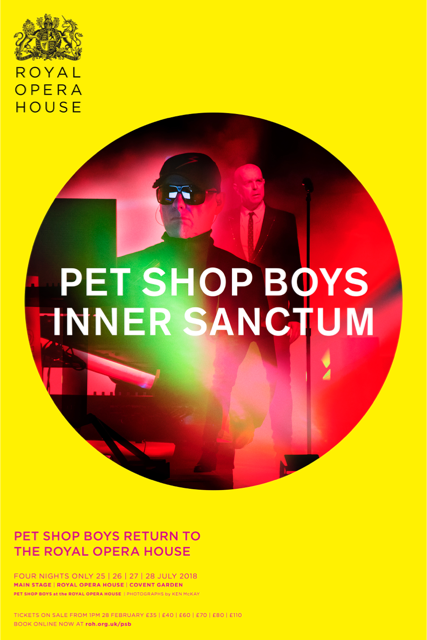 THE SHOW ‘INNER SANCTUM’ HAS BEEN STAGED BY DESIGNER ES DEVLIN AND CHOREOGRAPHER/DIRECTOR LYNNE PAGE.

TICKETS GO ON SALE AT 1PM ON FEB 28 FOR THESE SHOWS, WHICH WILL BE THE LAST CHANCE TO SEE THE PRODUCTION AT THIS LEGENDARY VENUE. “If Pet Shop Boys’ injecting of intelligence and pathos into chart hits (42 and counting) has helped to take pop to new heights, their conceptual stage shows have become equally vital. At the Royal Opera House, the curtain falls on some of the best pop hits you will ever hear” – The Independent 5*

“An arena-worthy show in a relatively small space, complete with crazy outfits and enough lasers to down the Millennium Falcon” – Evening Standard 5*

After the swift sell-out of the initial performances two years ago, tickets for ‘Inner Sanctum’ will be limited to four per person. Ticket prices range from £35 – £110 and are available from 1PM GMT Feb 28 from www.roh.org.uk/psb. No booking fees or delivery fees will be added to the ticket price.

Pet Shop Boys said today: “We were thrilled to bring electronic music into the grandest musical space in London for four memorable nights in 2016. Since then we’ve often been asked if we’re planning a return to the Royal Opera House and we’re excited to confirm that we’ll be back in July.”

Full schedule of shows announced below: