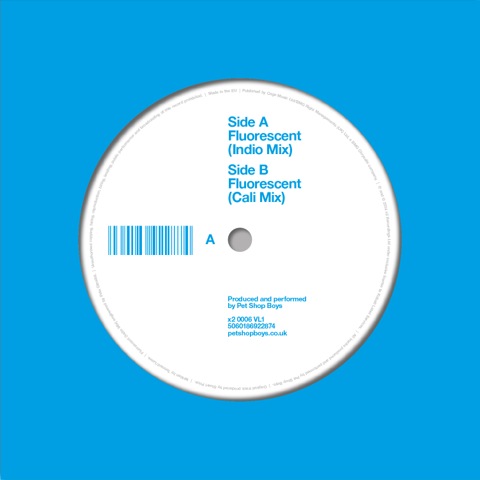 THE VINYL-ONLY RELEASE COUPLES TWO EXCLUSIVE MIXES OF “FLUORESCENT”.
Pet Shop Boys will release a limited-edition, 12-inch vinyl single of “Fluorescent” on their x2 label on Record Store Day, April 19th. Available only from UK independent record stores, the single features two exclusive remixes by Pet Shop Boys of “Fluorescent”, the Indio Mix and the Cali Mix. The song has been re-recorded by Chris and Neil with additional lyrics.

The original version of “Fluorescent” appeared on Pet Shop Boys’ current album “Electric” which was released on July 15th, 2013. The album, produced by Stuart Price, was very much a return to the dance floor and received ecstatic reviews.

The vinyl single track-listing is:

The single is released on Pet Shop Boys’ own label x2, via Kobalt Label Services.

Pet Shop Boys travel to the USA early in April for a 10-date tour including headline performances at Coachella and Moogfest. Their Electric tour will return to the UK, starting on May 29th in Brighton and then visiting Birmingham, Cardiff and Blackpool. They will be touring throughout the summer with concerts and festival performances across Europe, including Electric Picnic in Ireland.