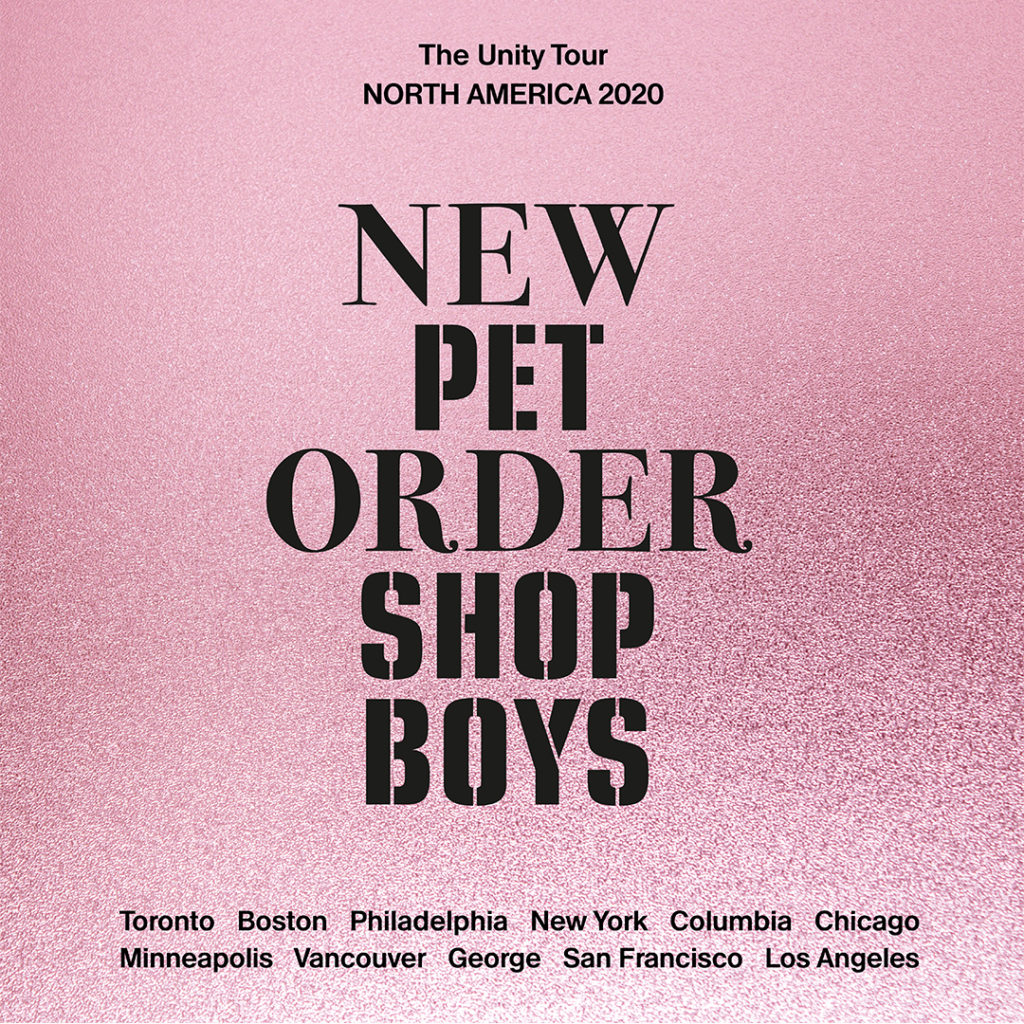 THE UNITY TOUR KICKS OFF THIS SEPTEMBER

TICKETS ON SALE TO GENERAL PUBLIC THIS FRIDAY, FEBRUARY 28

Pet Shop Boys and New Order have today confirmed a co-headlining tour of North America. The two British electronic bands have announced that ‘The Unity Tour’ kicks off on September 5 in Toronto and sees both bands play venues including Madison Square Garden in New York, Hollywood Bowl in Los Angeles and more. Both bands will play full sets, with the headliner alternating each night. Full dates are listed below.

Tickets go on sale to the general public from Friday, February 28th at 10am local time (specific to each US city), at Ticketmaster.com.

Pet Shop Boys recently released their fourteenth studio LP, Hotspot, via x2 Records/Kobalt to critical acclaim. The album reached #3 in the UK, German and Spanish album charts and #1 on Billboard’s Top Dance/Electronic Albums chart, making it the fourth Pet Shop Boys’ album to accomplish this. Hotspot is the third in a series of albums produced by Stuart Price (following 2016’s Superand 2013’s Electric.) Watch the video for “Monkey business;” HERE. Pet Shop Boys, Neil Tennant and Chris Lowe, are the most successful pop music duo in UK history and have sold over 50 million records worldwide, since they emerged in the UK in 1985 with their worldwide number one single, “West End girls”. They are three-time Brit Award recipients and six-time Grammy nominees and have also been acclaimed for their innovative and stylish tour productions on which they have collaborated with artists and directors as diverse as Derek Jarman, Zaha Hadid, Sam Taylor-Johnson and Es Devlin. In 2016 and 2018 they played four-night residencies at the Royal Opera House in London. Their greatest hits tour – Dreamworld: The Greatest Hits Live – opens on Friday, May 1st at Berlin’s Mercedes Benz Arena, and will see Pet Shop Boys perform at arenas across Europe and the UK in May/June/July.

Rising from the ashes of Joy Division, the enigmatic New Order triumphed over tragedy to emerge as one of the most influential and acclaimed bands of all time. While their debut album Movement (1981) was shadowed by the legacy of Joy Division, going forward the band combined their original post-punk sound with influences from New York’s club scene. The result was Power, Corruption & Lies (1983), released on Factory Records. From this album came the single “Blue Monday,” which has since become the best-selling 12-inch single of all time. They went on to release a string of albums; Low-Life (1985), Brotherhood(1986) Substance (1987) and Technique (1989). Republic (1993) Get Ready (2001) and Waiting for the Sirens’ Call (2005) before Peter Hook’s departure in 2007.

In 2015, the band released their critically acclaimed album Music Complete, reaching #2 in the UK album chart. The album’s title seems to shine a hue on New Order’s new manifesto: new line-up, newly eclectic sound, reinvigorated in their fourth decade as a unit.

New Order performed as part of Manchester International Festival 2017 for a series of unique shows in collaboration with Liam Gillick. These shows were such a success, they were taken to Turin and Vienna in May 2018 to further great acclaim and the live album released as ∑(No,12k,Lg,17Mif) New Order + Liam Gillick: So It Goes.. (2019). Continuing to play sold out shows the world over, recent live dates have seen them headline a four-night residency at The Fillmore Miami where January 15 was declared forever New Order Day in the City of Miami Beach.