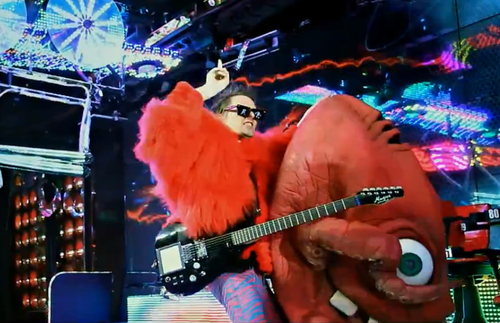 “PANIC STATION” IS THE FOURTH TRACK TO BE TAKEN FROM THE BAND’S PLATINUM SELLING SIXTH STUDIO ALBUM “THE 2ND LAW”.

Muse will release their new single “Panic Station” on June 3rd on Helium 3 / Warner Brothers Records. The single is the fourth track to be taken from the band’s platinum selling sixth studio album “The 2nd Law” and sees the band take to the streets of Tokyo in the awesome accompanying video. The single also features a remix by French producer Madeon.

Having opened the BRITs this year with an incredible performance of their previous single “Supremacy”, the band also recently played an intimate show in aid of War Child at London’s iconic Shepherds Bush Empire to celebrate 20 years of the charity. The performance received outstanding reviews from both critics and fans alike. View the whole set here – http://www.youtube.com/watch?v=Jiro61UjbB4&feature=youtu.be

The band are currently nearing the end of their US tour and, having just played two nights at Madison Square Gardens in NYC, will embark on their biggest stadium tour to date this May, with very special guest Dizzee Rascal appearing at all UK shows. Bastille will also join the band in Coventry on May 22nd, London on May 25th and Manchester on June 1st.