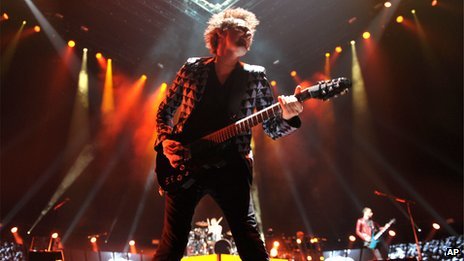 War Child and O2 are proud to announce Muse as the headline act for the much anticipated annual event at O2 Shepherd’s Bush Empire, two nights before the 2013 BRIT Awards.

This event marks the start of War Child’s 20th Anniversary Year, and comes ahead of War Child’s Special Recognition Award to be presented at the BRIT Awards.
Muse are nominated for British Group and British Live Act at the 2013 BRIT Awards.

This will be a very special, one-off, intimate show from a band currently gracing massive arenas on their US tour. This summer Muse return to the UK to play Coventry’s Ricoh Stadium, London’s Emirates Stadium and Manchester’s Etihad Stadium. The group first supported War Child in 2002 and worked with the charity as recently as October 2012 when they launched their album with a charity show at London’s Roundhouse.

Matt Bellamy said today; “We are proud to have a continuing association with War Child, who have been doing amazing work over the last 20 years. It’s great to see their efforts being recognised at this year’s BRITs and we are really looking forward to playing this special show for them”.

This is the fifth year of War Child and O2’s annual BRIT Awards Concert, hosted at O2 Shepherd’s Bush Empire. Having raised over £600,000 in the last four years, the night is a firm fixture on the music calendar and has staged unique performances from Coldplay, The Killers, Blur, Kasabian, Ed Sheeran and Mark Ronson.
The War Child BRIT Awards Concert is a celebration of great live music and the power of music to change people’s lives. All ticket proceeds will go to aid War Child’s work with children in war zones across the world.

2013 marks two decades of War Child’s unique work protecting the innocent victims of war. War Child UK has changed and saved the lives of over 800,000 children in the world’s most war-torn countries, children who would otherwise have been forgotten. From Bosnia, Chechnya and Rwanda to Afghanistan, Iraq and the Democratic Republic of Congo, War Child have given children the security, care, education and skills they need to build a better future for themselves.

War Child’s incredible achievements have been supported by the biggest artists of the last twenty years, the British music industry and music fans themselves.
Ben Knowles, Director of Fundraising and Music at War Child, says: “This year is a special one for War Child and we’re delighted to welcome one of the world’s biggest and best live bands play for us to launch our 20th Anniversary year and celebrate our Special Recognition BRIT Award.

Music gives War Child an incredible platform to talk about the unacceptable impact that conflict has on innocent children and it helps us engage the support we need to do something about it. We are very grateful to Muse for joining us, and to O2 for their ongoing support.”

Sally Cowdry, Marketing and Consumer Director at O2 said: “This is a very special year for us – it’s our 5th year of working with War Child and what better way to recognise this and help them celebrate their 20th anniversary than by announcing such an incredible event?  We are proud to continue to support the fantastic work that they do and to be able to offer our customers Priority Tickets for what will undoubtedly be one of the biggest gigs of the year “.

For more information on War Child go to www.warchild.org.uk
Text SAFE to 70444 to donate £3 to War Child’s Appeal for children in Syria.
Doors: 7.30pm
Tickets are priced at £50.
(Thanks to O2’s support 100% of your ticket price will go direct to War Child.)
Tickets available on O2 Presale at 9am Wednesday January 30
Tickets available on General Sale 9am Friday February 1
www.ticketmaster.co.uk and 0844 248 5028.

* VIP Ticket Packages available on Level One including access to pre & after parties, best seats in the house, complimentary drinks throughout the course of the evening.

Please contact GemmaC@warchild.org.uk / 0207 916 9276 for more information
O2 customers can get Priority Tickets to the War Child Brit Awards Concert from 9am Wednesday 30th, 48 hours before general release. Text Priority to 2020
The BRIT Awards are broadcast live on ITV1 on 20th February at 8pm.

2013 is War Child’s 20th Anniversary. From the start War Child has believed one thing: Children are the innocent victims of war and there is no excuse for their lives to be torn apart by it.
War Child have proved you can protect children and young people from the brutal effects of conflict and help rebuild their lives.
Today War Child are on the ground in some of the worst conflict-affected places in the world, providing support that changes lives.
And War Child are there long after the TV cameras have gone home: for the immediate impacts and for the long-term, from emergencies to recovery. We’re there for the most vulnerable children whose homes, families and communities have been torn apart. This includes children living and working on the streets, exploited in the worst forms of child labour and child-survivors of sexual violence.
War Child currently work in Afghanistan, Central African Republic, Democratic Republic of Congo, Iraq, Uganda and Syria.
You can donate to War Child and find out more by going to www.warchild.org.uk
If your company wants to get involved please contact fundraising@warchild.org.uk

O2 is the commercial brand of Telefónica UK Limited and is a leading communications company with over 23 million customers – read more about O2 at www.o2.co.uk/news. O2 runs 2G and 3G networks and was the first to trial 4G/LTE, reaching speeds of over 100Mpbs, as well as owning half of Tesco Mobile. It also operates O2 Wifi, O2 Health, O2 Unify, O2 Media and has recently launched the O2 Wallet. O2 employs over 11,000 people in the UK, has 450 retail stores and sponsors The O2, O2 Academy venues and the England rugby team.

Telefónica UK Limited is part of Telefónica Europe plc which uses O2 as its commercial brand in the UK, Ireland, Slovakia, Germany and the Czech Republic and is a business division of Telefónica SA.

About Metropolis
The 2013 show sees War Child partner with Metropolis Music, one of the country’s leading live music promoters with over 25 years experience and part of the team behind such notable events as V festival, Blur’s legendary Mile End Stadium show and the Wembley Stadium shows by Coldplay, one of the stars of the inaugural War Child show in 2009. www.metropolismusic.co