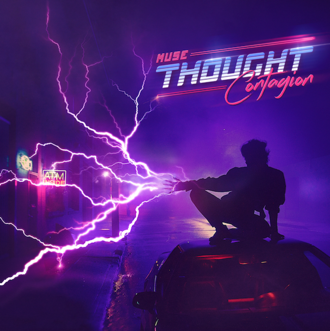 Muse have released their brand new single ‘Thought Contagion’ which is available on all digital platforms now.

The accompanying video is available to watch here. Directed by Lance Drake (who also helmed the band’s Dig Down video) “Thought Contagion” is an ‘80s infectious neon love story.

Matt Bellamy said of the track:

“The meaning of the song ‘Thought Contagion’ is about how other people’s thoughts, ideas and beliefs can sometimes infect your mind, get into your head and change the way you think yourself”.

Last night the band were presented with the prestigious NME award for ‘Best Festival Headliner’ after their epic set at Reading & Leeds festival in 2017, which saw AC/DC’s Brian Johnson join the band on stage for a blistering rendition of ‘Back In Black’ – watch here.

‘Thought Contagion’ was produced by Rich Costey and Muse, mixed by Adam Hawkins.

Muse is Matt Bellamy, Dominic Howard and Chris Wolstenholme. Their last album, Drones, was released in June 2015 and debuted at No. 1 in 21 countries around the world including their first No. 1 album in the United States.  The album went on to win the Grammy Award, their second, for Best Rock Album in February 2016.  Since forming in 1994, Muse have released seven studio albums selling in advance of 20 million albums worldwide.  Widely recognised as one of the best live bands in the world, Muse have won numerous music awards including two Grammy Awards, an American Music Award, five MTV Europe Music Awards, two Brit Awards, ten NME Awards and seven Q Awards, amongst others.