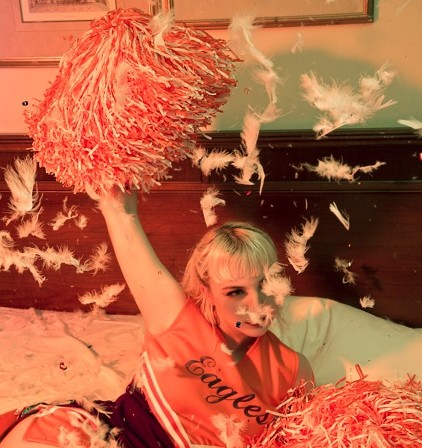 LEAD TRACK ‘CLOUD 69’ IS AVAILABLE TO DOWNLOAD FOR FREE NOW

“Beats skitter and thump and an army of Lowells seems to multiply with each spikily triumphant chorus.” Noisey

“If she can maintain this level of intensity, the world will be bowing at her feet.” Fake DIY

Toronto-based artist Lowell first appeared with a mini-album ‘If you can Solve this Jumble’ after collaborating with the Apparatjik collective, featuring Grammy-winning producer Martin Terefe, members of A-ha, Coldplay, and MEW. The lead single, ‘Shake Him Off’, received support from 6 Music and Radio 1 with plays from Lauren Laverne and Nick Grimshaw. In 2012 she made her live debut performing with the band in front of 60,000 attendees at Roskilde in Denmark.

2013 proved to be a busy year for Lowell. She embarked on her first ever tour of the UK backed only by a drummer including appearances at The Great Escape and an opening slot for Chad Valley in London. She also played showcases at CMW and CMJ as well as an appearance at Pukkelpop Festival in Belgium.

The self-styled singer, songwriter, producer and video artist, whose name in both English and French means Wolf Cub, has once again teamed up with Martin Terefe to produce her debut EP and first on Arts & Crafts, ‘I Killed Sara V’.