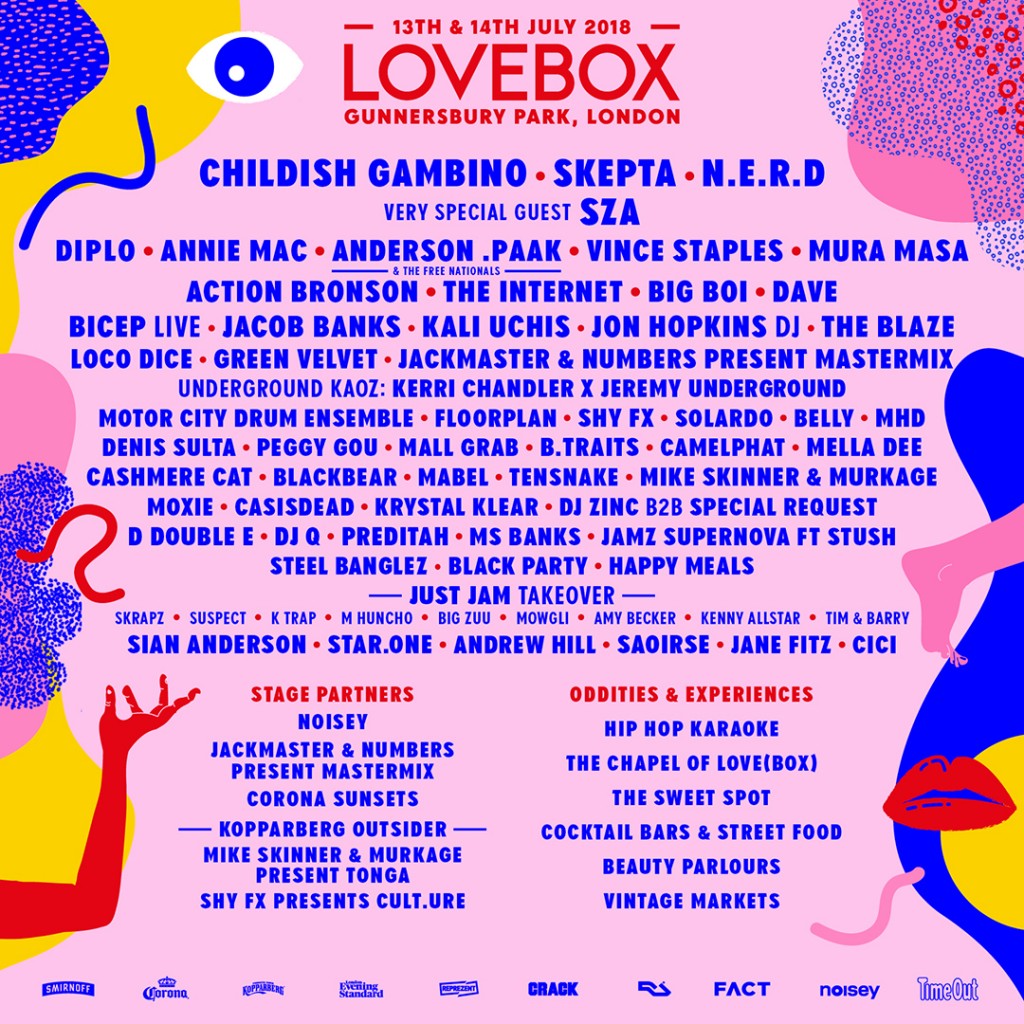 Having just announced their brand new location at West London’s Gunnersbury Park, Lovebox are thrilled to share their massive 2018 line-up.

With headline sets from the Grammy-winning Childish Gambino on the Saturday, and grime icon Skepta on the Friday, plus appearances from N.E.R.D, SZA, Anderson .Paak & The Free Nationals, Vince Staples, Mura Masa, The Internet and Kali Uchis, Lovebox has delivered the electrifying, genre-spanning line-up they have become synonymous with.

On Saturday, another trailblazing solo artist tops the billing. Lovebox are delighted to welcome Childish Gambino to the Lovebox Main Stage. Childish – AKA Donald Glover – is the definition of multi-talented, juggling the roles of rapper, singer, songwriter, producer, actor, comedian and director with ease. He began releasing mixtapes in 2008, as his career as a TV writer and actor took off. In 2011, debut album Camp garnered critical acclaim and was succeeded by his sophomore release Because The Internet, which secured his reputation as one of the most charismatic figures in hip hop. However it has been the monumental success – both critically and commercially – of his most recent album, the soul-tinged, funk-leaning Awaken, My Love! which has seen Gambino ascend to even greater heights, securing a whopping five Grammy nominations, going on to win the gong Best Traditional R&B Performance for the omnipresent standout track Redbone.

Friday’s headliner Skepta is one of UK music’s most prominent figures, and a trailblazer of the grime scene. His early days in the Meridian Crew and Roll Deep and as a founder member of Boy Better Know established him as one of grime’s key players. In 2014 his single ‘That’s Not Me’, featuring brother and fellow BBK member JME became a breakout hit, laying the foundations for a slew of massive singles and eventually his critically-acclaimed fourth album Konnichiwa, which won the 2016 Mercury Music prize. Skepta is often deservedly credited for his role in the resurgence of grime, and re-energising the genre. He returns to headline the Lovebox Main Stage after an unforgettable performance in 2015.

The energy continues throughout the billing. Lovebox are thrilled to have the enigmatic, genre-hopping experimentalists N.E.R.D – AKA Pharrell Williams, Chad Hugo and Shae Haley, take to the stage to co-headline the Saturday in the wake of their explosive comeback. Their first album since 2010, No One Ever Really Dies featured one of the best tracks of 2017, ‘Lemon’, with Rihanna.

SZA had an incredible 2017. Her debut album Ctrl was a breakout moment for the TDE-signed R&B star, garnering critical acclaim and securing four Grammy nominations. We’re thrilled to have her at Gunnersbury.

Two of our favourite DJs will return to Lovebox. Anything super-producer Diplo touches turns to gold, and his energetic sets only serve to reflect his impressive back catalogue. Meanwhile, Lovebox friend and favouriteAnnie Mac will be coming along for the ride to Gunnersbury Park for her annual slaying of the Main Stage.

There’s the extraordinarily talented rapper/singer-songwriter Anderson .Paak (alongside his equally gifted bandThe Free Nationals) who has quickly become one of the biggest, sought-after names in hip hop and R&B, as well as Long Beach rapper Vince Staples – one of the most vital and recognizable voices in hip hop.

Rising electronic star Mura Masa makes his Lovebox debut. His collaborations with A$AP Rocky and Charli XCX won over hearts and dancefloors in 2017. His debut self-titled album was one of our favourites last year.

Big Boi is an artist that needs no introduction. As one-half of legendary Atlanta rap duo OutKast he helped redefine hip hop as we knew it. As a solo artist, he’s given us four albums which saw him branching out and experiment with electronic music.

Two newcomers from different sides of the pond will be hitting Lovebox for the first time. Birmingham-born R&B star Jacob Banks brings his signature soul to Gunnersbury, as will Kali Uchis, the fast-rising Colombian-American singer who has collaborated with Tyler, The Creator and Jorja Smith.

Some of the biggest names in dance will be at Lovebox, from celebrated producer Jon Hopkins (DJ) to the legendary Loco Dice via unconventional house hero Green Velvet. Lovebox favourite Jackmaster will be bringingJackmaster & Numbers Present Mastermix to the Park – his epic sets are always a highlight.

German house staple Motor City Drum Ensemble will also be appearing. He’s had a massive few years thanks to his simultaneously retro and futuristic take on house, and we’re delighted to have him in the Park. Another experimental figure, Floorplan AKA Robert Hood, will also be joining us at Gunnersbury Park, as will drum and bass pioneer Shy FX and his stage Shy FX Presents CULT.URE, plus house and techno duo Solardo.

Some of the coolest names in electronic music will be making their Lovebox debuts. We’re thrilled to welcomeDenis Sulta (dubbed as house music’s “next big thing” by Resident Advisor), Australian producer Mall Grab, Berlin-based newcomer Peggy Gou, Radio 1’s B.Traits, UK production duo CamelPhat and Warehouse Music’sMella Dee to Gunnersbury Park. All unique in their own way, but every single one is breaking through and hotly tipped as dance music’s next big thing.

There’s a slew of much-hyped names from the US in the form of rapper, producer and Grammy nominee Belly, rapper-songwriter blackbear, and mysterious newcomer Black Party.

Shining R&B star Mabel is introducing soul to a new generation. Breakout hit ‘Finders Keepers’ with Kojo Funds has racked up 27 million views on YouTube, and it looks to be just the start of Mabel’s grip on UK R&B.

Two artists putting French music on the map cross the channel to Gunnersbury Park. MHD’s take on Afro Trap has spread like wildfire through his native France and is on course to go global, whilst duo The Blaze’s melodic blend of house and dub – and stunning visuals – have seen them lauded by Rolling Stone and The FADER.

Finally, there’s some of the finest DJs in the UK in the form of Andrew Hill, Saoirse, Jane Fitz and Cici. All have quietly played a part in shaping the sound of the dancefloors we know and love today.

Artists will be playing across a carnival of stages hosted by Noisey, Jackmaster & Numbers present Mastermix,Mike Skinner and Murkage present Tonga, Shy FX presents CULT.URE, Corona SunSets and Kopparberg Outsider all hosting their own line-ups, to be announced later this year.

In trademark Lovebox style expect the usual oddities and experiences, from award-winning beatboxers, an afternoon of Afrobeats and the legendary Hip Hop Karaoke in The Sweet Spot – a new bar & social club for 2018, to Best Friend Marriages & Confessionals at The Chapel of Love(box), plus cocktail bars and dining from the best of London’s vibrant street food scene, as well as beauty parlours and vintage markets to get glittered up for the weekend.

This is just the first wave of artists for Lovebox – with even more acts to be announced, it’s set to be another banner year for London’s most-loved festival.