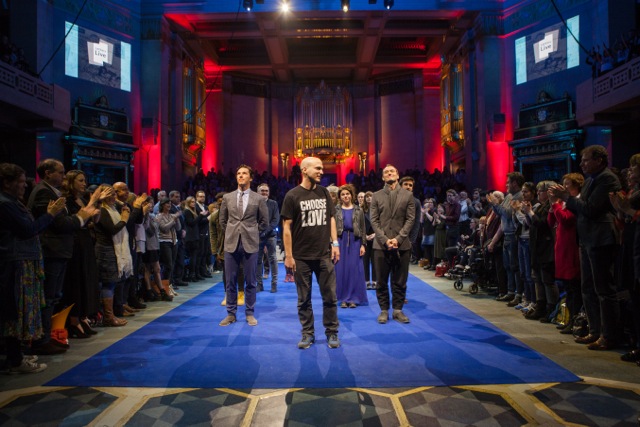 MANY MORE NAMES TO BE ANNOUNCED IN DUE COURSE

Letters Live, the live celebration of literary correspondence, today announces its first star-studded wave of names for its upcoming residency at London’s iconic Freemasons’ Hall from 4-8th October. Tickets are on sale now.

Inspired by Shaun Usher’s international best-selling Letters of Note series and Simon Garfield’s To The Letter, Letters Live has moved audiences to both laughter and tears through a series of heartfelt, humorous and at times, heartbreaking letters, delivered by the most talented and acclaimed talent from the worlds of arts and culture. True to Letters Live tradition, each show’s line up will remain a closely guarded secret until the curtain call, promising a unique and truly unforgettable evening of unearthed letters and dazzling performances.

The charities that Letters Live is supporting through this run of shows are Ministry of Stories, First Story and Help Refugees.

Jamie Byng, CEO of Canongate Books and a Director of Letters Live, added: “This third run of Letters Live shows to be held here in London looks set to be as memorable as anything we have ever done.  The combination of great talent, remarkable letters, three important charities, packed houses and an amazing venue, should result in five unforgettable evenings that celebrate the humble letter and its immense power.  And every night is unique.”

Confirmed names for Letters Live stage from 4-8th October 2016, are:

‘What a tribute to the power of words’ – Evening Standard

First Story changes lives through writing; we’ve seen how writing can empower young people and build their literacy, creativity and self-esteem. Our programme brings acclaimed writers into secondary schools serving low-income communities throughout the UK. Through weekly creative-writing workshops, students gain skills that can underpin their success in school, support their transition to employment and enhance the quality of their lives.

We are delighted to be collaborating with Letters Live for the second time. Letter writing is a powerful form of self-expression  and we are thrilled to be part of an event that celebrates this rich art form and promotes the critical importance of literacy.

About Ministry of Stories

The Ministry of Stories is an imaginative space and community that supports and inspires young people to write. It runs innovative storytelling and writing workshops in disadvantaged areas that empower young people’s imaginations and build confidence, self-respect and communication skills. It then provides a publishing platform so their voices and stories are heard.

Current funders include Arts Council London and a number of other charitable trusts, individuals and sponsors. For a comprehensive list and to learn more about ways to donate, please see http://ministryofstories.org/support-us/.

Help Refugees is a grassroots humanitarian organisation. It was founded by a group of friends in September 2015, in response to the refugee crisis unfolding on our doorstep. It is now providing aid in more camps across Europe than any other grassroots humanitarian organisation. Help Refugees pride themselves in providing fast and effective emergency relief, while maintaining the dignity of those in need. Their work in the past year has been acknowledged by UNHCR, Oxfam, Red Cross, Save the Children, Medicins Du Monde, and Amnesty International. They campaign for the rights of refugees, in particular unaccompanied minors, and have been instrumental in passing the Dubs Amendment and the activation of the Dublin Three Agreement – www.helprefugees.org.uk

SunnyMarch was founded when internationally acclaimed actor Benedict Cumberbatch joined forces with producers Adam Ackland and Adam Selves to develop innovative scripted and non-scripted content for both the small and big screen. SunnyMarch recently announced “The War Magician” feature with StudioCanal. The War Magician tells the story of Jasper Maskelyne, the magician whose illusions helped the allied forces fight the Nazis during World War II.