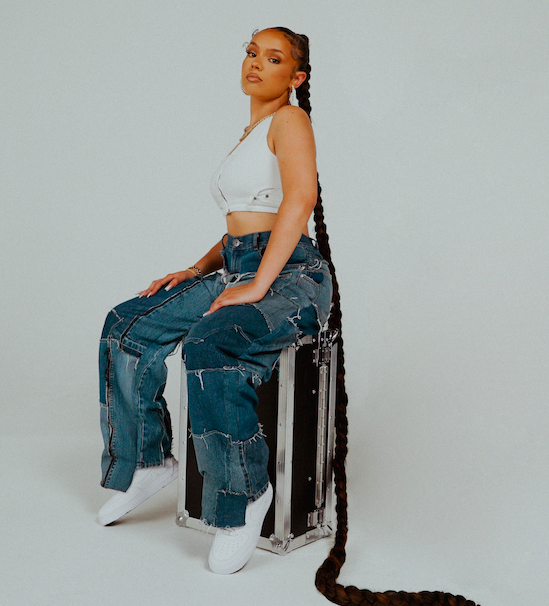 “On another cloud.” – CLASH

“One of the most exciting prospects.”  – GUAP

UK singer, songwriter and producer Kali Claire has today released her brand-new single and video, ‘Temporary Feels’, which is out now via global artist services company Platoon. Watch the video here and stream the single here.

The track, which was produced by Loner Beats, has a classic R&B sound and features vocals from fellow East Londoner Jvck James and soothing piano notes. The video, meanwhile, was directed by Vylit, and shows Kali and Jvck in minimalist white and black rooms adorned with red roses. ‘Temporary Feels’ follows the release of Kali’s previous singles, ‘Wild’ and ‘Disrespekt’, which were released earlier this year.

Born and raised in Hackney, East London, Kali, who is half-Jamaican, half-Irish, grew up with the far-reaching sonic influences of her household – from the psychedelic leanings of The Beatles from her grandmother to pulsing jungle, R&B, hip-hop and the genre-blurring rhythms of Bon Iver from her mother.

Pre-lockdown, she performed to a sold-out Sofar Sounds audience, played a stripped-back performance at Soho House, supported Mabel on her European tour, and took part in the iconic adidas London’s #HereToCreate Autumn/Winter campaign last year. She has more than 7 million streams across all platforms to date and has received playlist support at Apple Music (Apple Music 100 Songs of The Year, R&B Now) and Spotify (New Music Friday, R&B UK and This Is How We Do It). In addition to her own music, she co-wrote the track ‘Wasted Energy’ on Alicia Keys’ 2020 album ‘Alicia’.

‘Temporary Feels’ is out now via Platoon with more music to come in the coming months.