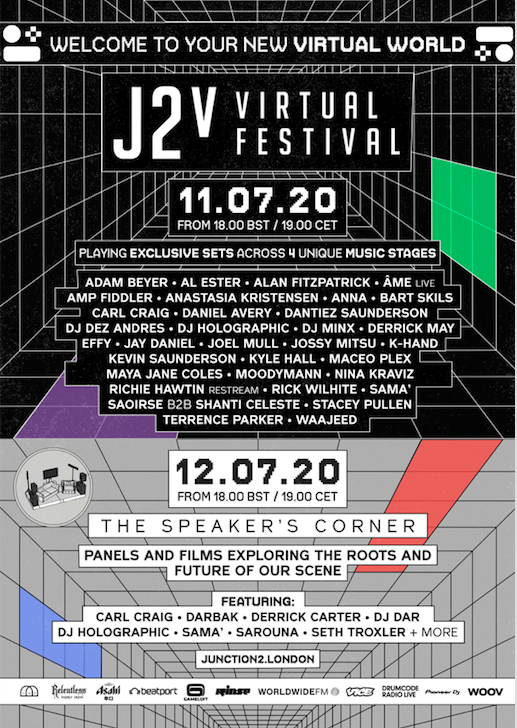 A NEWLY ADDED SECOND DAY OF PANEL DISCUSSIONS & FILM WILL EXPLORE THE ROOTS OF ELECTRONIC MUSIC, THE GROWING ELECTRONIC SCENE IN PALESTINE, EQUALITY IN THE MUSIC INDUSTRY & MORE

Junction 2 Festival has announced the rescheduled date for its special one-off event – J2v – which will now take place across two days on Saturday 11th July and Sunday 12th July 2020 to commemorate the festival which was sadly cancelled because of the Coronavirus pandemic.

The six-hour online and radio broadcast, which will take place from 6pm-midnight BST on day one, will bring some of the scene’s best music direct to fans who can enjoy it in the safety of their own homes. Going beyond the usual DJ stream, J2v has created a 3D interactive experience for the festival’s dedicated fan-base. J2v is completely not-for-profit and Black Lives Matter UK has been added as a beneficiary charity alongside the event’s other chosen charities: The Care Workers Charity, Refuge, The Outside Project and The Trussell Trust foodbanks.

The artists will play across four distinct “stages” – The Console hosted by Drumcode in association with Relentless Energy Drink, The Vault in association with Asahi Super Dry, The Hex hosted by ION Festival in association with Vice, and a new stage, The Mainframe: Say It Loud Stage, hosted and curated by Detroit legend Carl Craig in association with Beatport. In keeping with the spirit of the festival, the stages will have their own immersive visuals, vibe and aesthetic, and listeners can virtually move between them to enjoy the different line-ups as they would at the actual festival. Emulating the community feel of Junction 2 Festival, fans can even interact in real-time with fellow attendees via a chatroom and visit a virtual bar to get advice on how to create bespoke cocktails at home.

The new Mainframe: Say It Loud Stage will feature a line-up of DJ talent from long-time Junction 2 collaborator Carl’s hometown and one of the key birthplaces of the festival’s scene, Detroit. Reading like a who’s who of Motor City’s underground scene – with all 16 artists playing back-to-back-to-back from a warehouse in Detroit – the Godfathers of techno, high-tech soul man Derrick May and Inner City’s Kevin Saunderson will be appearing, as will Kevin’s son Danietz Saunderson, Kyle Hall, Jay Daniel, and P-Funk innovator and George Clinton protege Amp Fiddler. Other names completing the line-up are DJ Holographic, DJ Minx, Stacey Pullen, “TP” Terrence Parker, Moodymann, Rick Wilhite, Waajeed, K-HAND, Al Ester and Dez Andres. Watch a teaser videohere.

The new J2v line-up, with the inclusion of Carl’s stage, is a direct response to a process of reflection in recent weeks as a result of the Black Lives Matter movement and is part of the festival’s long-term commitment to support increased diversity and to proactively address inequality in the industry. A second day of panellist discussions with some of the major players in the scene has been added, starting at 6pm they will explore the roots of electronic music and how we can make positive change in the future. The “Speaker’s Corner” will include a panel with Carl Craig, Derrick Carter, Seth Troxler and DJ Holographic in-conversation discussing the African American roots of electronic music and awareness of equality in the industry; a conversation with Sama’, Sarouna, DJ Dar and Darbak exploring the growing electronic community in Palestine and the power of dance music as a unifying force; and a discussion on the future diversity of London’s electronic music industry.

Listeners can choose to enjoy the music and talks via the web or radio. While the Junction 2 Festival website will serve as the central 3D hub, you can also listen to the Console Stage line-up via Drumcode Radio, The Mainframe: Say It Loud Stage via Worldwide FM and a selection of artists from across all four stages on Rinse FM. J2v is also partnering with Beatport, the world’s largest electronic music store, which will be streaming all four stages live on beatport.com. Visitors can purchase tracks live in real-time via Beatport’s live track identification system and the stream will be syndicated via Beatport’s Twitch, YouTube and Facebook live network.

In an innovative and unique collaboration with award-winning video game publisher Gameloft, gamers using mobile racing games Asphalt 8: Airborne and Asphalt 9: Legends will have the option to watch the J2v streams via the app and play a special London version of the game.

As part of J2v, the festival has also launched a virtual arts exhibition in association with Asahi Super Dry. The festival has asked 3D digital designers to get involved in the event by submitting their work to potentially be showcased during the virtual event. What’s more, the festival’s favourite digital artwork will be commissioned to be displayed for real at Junction 2 2021. Entries can be existing pieces of work or brand new designs and can be submitted here.

In partnership with Relentless Energy Drink, J2v will release a bespoke AR filter that allows party-goers to step inside the digital world for a brief moment giving a sneak peek of the event’s signature wire frame design. Incorporating face mapping, tracked graphics and bespoke sounds, the filter is available from Friday 10th July and will be found via both Junction 2 Festival and Relentless Energy Drink’s Instagram accounts.

Following the success of the Black Boxes competition, J2v’s partners and sponsors, including Relentless Energy Drink, Asahi Super Dry, Pioneer DJ, Beatport and Jagermeister, have donated 25 limited edition Black Boxes – featuring essentials for the event such as drinks, mixers and merchandise – with 100% of the proceeds split between the event’s chosen charities. A wider range of J2v merchandise is also available via the website including T-shirts, hoodies and tote bags, with proceeds going to these important causes.  For more info see here.

The day one J2v line-up and stage splits in full are:

The Mainframe: Say It Loud Stage
Curated by Carl Craig
In association with Beatport

And words by Jessica Care Moore

The Console
Hosted by Drumcode
In association with Relentless Energy Drink

The Vault
In association with Asahi Super Dry

The Hex
Hosted by ION Festival
In association with Vice

The day two J2v panels in full are:

Long-time LWE collaborator and Planet E label head Carl Craig is joined by Chicago’s Derrick Carter and Detroit raised artists Seth Troxler and DJ Holographic, in a discussion of the African American roots of electronic music and raises awareness of equality in our industry; the past, present and future. Moderated by Ralph Moore (Acetate Artist Management/Mixmag), who was chosen by Carl to chair the discussion.

Techno: Music of unity and resistance. A conversation with Sama’, Sarouna, DJ Dar and Darbak.

Exploring the growing electronic community in Palestine, and the power of electronic music as a unifying force. This panel is moderated by Resident Advisor’s Martha Pazienti Caidan. The Union Collective is an artist collective that brings together DJs, music producers, visual artists, dancers and other crafts to create a platform for the electronic music scene in Palestine.

Deeds Not Words: The future of diversity in London’s electronic music industry.

Four key players of London’s electronic music industry discuss the future of diversity in our workplaces, looking beyond performative allyship and exploring topics such as mentorship, resource sharing, the future of internships, nurturing supportive working environments and more. This panel is moderated by LWE and Junction 2 Festival’s Head of Operations, Alex Beattie.

For more information on the event’s charities please visit: