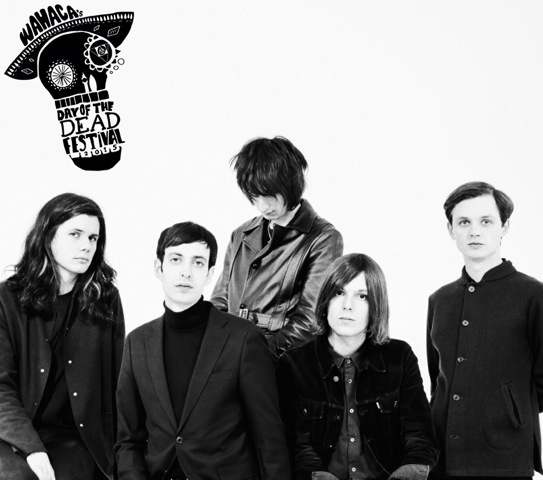 THE HORRORS, SAVAGES, CRYSTAL FIGHTERS, MEXRRISSEY AND MANY MORE CONFIRMED FOR WAHACA’S DAY OF THE DEAD FESTIVAL ON NOVEMBER 7TH AT LONDON’S TOBACCO DOCK

WAHACA’S DAY OF THE DEAD FESTIVAL IS A 12 HOUR PARTY TO CELEBRATE THE DEAD AND THE LIVING – ‘DIA DE MUERTOS’ IS COMING TO TOBACCO DOCK, LONDON

This November, Wahaca will host the mother of all fiestas as they bring the annual Mexican holiday Dia de Muertos (Day of the Dead) to East London’s iconic Tobacco Docks.

Heading up the multi-sensory celebration of mortality will be post-punk four piece SAVAGES and synth-rockers THE HORRORS alongside CRYSTAL FIGHTERS, ZOE, cult Mexican Morrissey tribute band MEXRRISSEY and many more. As the sun sets, UK and Mexican DJs including Mad Decent’s TOY SELECTAH and ERICK RINCON of “3ball Mty” (Tribal Monterrey) will go head to head alongside PSYCHEMAGICK to bring the unique hedonism of Mextronica to East London.

Speaking of their appearance at the festival, The Horrors said:

“The Mexican tradition of celebrating the dead on Dia De Los Muertos is something we’ve been interested in for a while – a brilliantly macabre yet uplifting party … It’s great the celebrations are heading to the UK – we’re really looking forward to playing Wahaca’s Day Of The Dead Festival.”

The Day of the Dead is celebrated in Mexico and across Latin America at the beginning of November, giving an opportunity to celebrate the lives of loved ones who’ve passed in an incredibly positive and uplifting moment of remembrance. It’s Wahaca’s ambition through their festival to transport this life affirming tradition to the UK.

No Day of the Dead Festival would be complete without fine food and drink and Wahaca will of course be cooking up a storm. The historic atria of The Tobacco Docks will feature stalls serving Mexican market tacos, contemporary tortas, smokey barbacoa, slow cooked pork pibil, fresh churros and Mexican hot chocolate, whilst bars will host a range of tequilas and mescal spirits. One of Mexico’s most prominent chefs Enrique Olvera will be joining the festival food line up to host a ticketed supper club dining experience with Wahaca’s Thomasina Miers.

Wahaca’s Day of the Dead Festival will also host a variety of visual culture and experiential art for all to enjoy. Celebrating mortality in all it’s guises will be the combined works of DEATH – A CELEBRATION OF MORTALITY from the SAATCHI GALLERY, plus work from renowned Mexican artist Betsabee Romero, and others as well as street art from Oaxaca-based collective La Piztola. Cultural icons throughout history will also be celebrated via the ubiquitous, brightly decorated Day of the Dead alters, where fans can pay respects and celebrate the life and talents of cultural icons of years gone by. To celebrate, Wahaca has launched a social media competition where members of the public are invited to share a photograph of their cultural icon who they think deserves to be celebrated in death. By posting alongside the #WahacaDOTD hashtag they will to be in with a chance of winning £250 worth of Wahaca and a VIP experience at the festival for 2.

Also on site will be Immersive Cult and the best in beautiful tattooistry, as celebrated Mexican inspired artists such as Christie (KIDS LOVE INK), Araceli Forever and NEOAZTECA (Mexico) exhibit their works, whilst also taking bookings live at the event.

English PEN, the global charity for literature and freedom of expression, will host a daytime programme of debates from a range of UK journalists and writing talent including Simon Schama, Homero Aridjis, Diego Luna, Gaby Wood, DBC Pierre, Martin Rowson, Ioan Grillo, Alfredo Corchado, Thomasina Miers, Jon Snow, Rosie Birkett, amongst others to explore the issues – both positive and negative – affecting the Mexican state and the importance of the written word.

Keep up to date on twitter at @Wahaca, @thomasinamiers and at www.wahaca.com/DotD