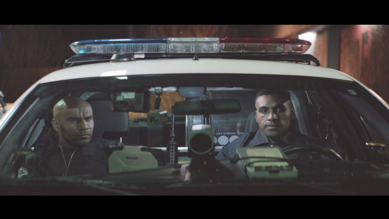 GOLDIE STARS IN VIDEO FOR HIS NEW SINGLE ‘CASTAWAY’

NEW DOUBLE ALBUM ‘THE JOURNEY MAN’ IS OUT TODAY

“Goldie has made a rather gorgeous record” – The Arts Desk 4*

Goldie has today released the official video for his single ‘Castaway’, taken from his brand-new album ‘The Journey Man’, which is also out today.

The video stars Goldie himself, alongside Brian Bovell (Babylon, Coronation Street, Hollyoaks) and is directed by Goldie’s long-time collaborator Lyle Lindgren. Set against the insular backdrop of a remote gas station somewhere in non-descript USA, the video’s aesthetic pays subtle homage to Goldie’s time spent in Miami in the 80s and 90s, as sees him and his fellow police officer demand a driver open the boot of his car…to reveal what is inside.

Goldie will embark on his first ever UK live headline tour this Autumn, with members of the Heritage Orchestra. The tour will see Goldie perform at venues across the country including a highly anticipated show at London’s Roundhouse and a homecoming performance at Wolverhampton’s Civic Hall. Goldie previewed these upcoming shows over two sold-out nights earlier this year at London’s legendary jazz venue Ronnie Scott’s. Met with outstanding critical acclaim, DJ Mag said: “Goldie’s is a performance all of his own…his contribution is pure petroleum; fuel for the fire.

For details of The Journeyman Tour: www.goldie.co.uk

Goldie’s new album ‘The Journey Man’ is out now via Metalheadz/Cooking Vinyl’ and available on 2CD, Deluxe 3CD, 3LP, Download, Deluxe Download and to stream now from the following:  https://goldie.lnk.to/TYM

Signed items are available from the Official Store: https://goldie.lnk.to/TYMFa/goldiestore