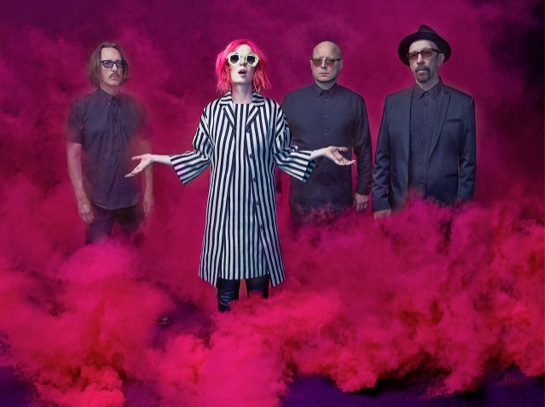 Twenty years after the release of their self-titled debut album, GARBAGE will celebrate their lauded career with an anniversary tour throughout Europe and the US. Christened the 20 Years Queer Tour, the band will play their debut album in its entirety for the first time.

Garbage was born out of such unusual elements and unusual circumstances, and we were shocked when the first record became such a success. We’re just as surprised to be here now, intact, so many years later, enthusiastically preparing to get back on the road with that album and all its attendant b-sides and lord knows what else. A big piece of our lives remains caught up in the making of that record, and we know it holds a special place for the fans that have kept us going for so long. We can’t wait. This tour is going to be a blast. – STEVE MARKER

Garbage released their genre defying, groundbreaking debut on August 15, 1995 at a time when grunge music dominated the airwaves and mainstream culture. Their distinctive approach to songwriting and production, blending elements of rock, pop and electronic music, captured the attention of critics and fans all over the world. The album spawned multiple hits including: Vow, Queer, Stupid Girl and Only Happy When It Rains. It spent more than a year on both the US and UK charts, received multi-platinum certifications around the world and was nominated for three Grammy awards including Best New Artist and Best Rock Song (Stupid Girl). The album went on to sell over 4 million copies worldwide.

Later this summer, Garbage will release a special 20th Anniversary edition of the album that will be re-mastered and feature all of the remixes and previously unreleased versions of songs from their debut.

Tickets will go on-sale Friday, June 12. Check Garbage.com for additional ticketing information. Torres will support on their US dates and Dutch Uncles will support in Europe.

UK and European dates below:

Garbage is Shirley Manson, Duke Erikson, Steve Marker and Butch Vig. After forming in Madison, WI, Garbage released their self-titled debut album in 1995. The band’s unique sound and provocative visual aesthetic, inspired massive worldwide attention and success. Their follow up album, Version 2.0, released in 1998, topped charts all over the world and garnered multiple Grammy Award nominations including Album Of The Year. Garbage went on to release two more albums: 2001’s Beautiful Garbage and 2005’s Bleed Like Me, the latter which earned the band its highest chart position with a No. 4 on the Billboard Top 200 Album Chart. After a 7-year hiatus, the band released their fifth studio album Not Your Kind of People in 2012 on their independent record label, Stun Volume. The album was named one of Rolling Stone magazine’s Top 50 Albums of 2012 and was hailed as the “alternative to everything,” by Pitchfork. Garbage has sold over 12 million albums worldwide and performed in over thirty-five countries. The band is currently working on their sixth studio album, set for release early next year.