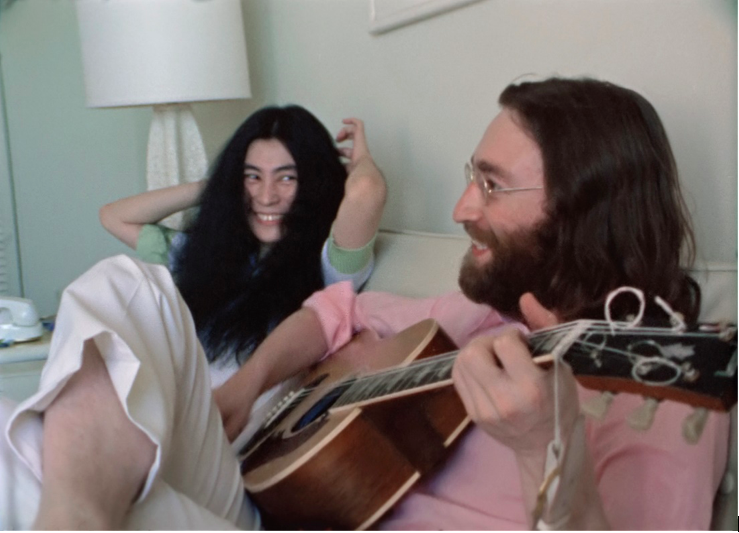 “ALL WE ARE SAYING IS GIVE PEACE A CHANCE” – JOHN LENNON

Los Angeles – April 13, 2021 – Before famously recording their legendary pacifist anthem “Give Peace A Chance” at their Bed-In for Peace at the Queen Elizabeth Hotel in Montreal on May 31st, 1969, John Lennon and Yoko Ono rehearsed an early version of the song while at the Sheraton Oceanus Hotel in the Bahamas just days before, on May 25th. The performance, which was captured by the Lennon’s film cameraman Nic Knowland and sound recordist Mike Lax, has never been released until now and is the earliest known recording of the song.

The film, meticulously restored and released today in incredible 5K by the John Lennon Estate, features John humorously ad-libbing lyrics for the verses before being joined by Yoko for the memorable chorus that became an anti-war anthem for a generation and which remains an enduring protest song more than 50 years later.

Originally set for New York, the second Bed-In was relocated to the Bahamas after John and Yoko were denied entrance into the U.S. because of John’s 1968 cannabis conviction. However, due to the layout of the hotel and the sweltering Bahamian heat, the couple flew to Toronto the following day and eventually settled in Montreal, chosen for its close proximity to New York and the American press, which they were hoping to use to get the attention of President Nixon.

The couple set themselves up in a hotel suite for a week, where they allowed unlimited access and gave endless interviews, in order that their extended honeymoon serve as a “commercial for peace.” The event culminated with the recording of John’s first solo single and the first to be credited to the Plastic Ono Band, “Give Peace A Chance.”

Surrounded by fans, Hare Krishnas and having spent the week with a host of notable friends and celebrities like LSD advocate Timothy Leary, singer Petula Clark, disc jockey Murray The K, comedian and civil rights activist Dick Gregory and comedian Tommy Smothers, who accompanied on acoustic guitar, John and Yoko performed the song in bed dressed in their pyjamas and helped provide the soundtrack to a revolution.

Released just a month later in July 1969, backed with Yoko’s “Remember Love,” recorded that same night after their guests had left, the single reached No. 2 on the UK Singles Chart and No. 14 in the U.S. on the Billboard Hot 100, giving John his first hit outside of The Beatles. Although credited to Lennon-McCartney, John later revealed the song was written by him and Yoko and she should have received the co-writing credit.

John said one of his proudest moments was when Peter Seeger led a crowd of over half a million protesters in singing a ten-minute version of “Give Peace A Chance” at the Vietnam moratorium in Washington DC on November 15,1969.

This unearthed video comes in advance of the forthcoming box set, John Lennon/Plastic Ono Band – The Ultimate Collection, due April 23 via Capitol/UMC, of which the track is included  alongside demos for every song on the album as well as John’s non-album singles. The eight-disc super deluxe box set, celebrating 50 years of John’s transformational and influential masterpiece, is an immersive, deep listening experience and in-depth exploration of the record John described as “the best thing I’ve ever done.”

Fully authorized by Yoko Ono Lennon, who oversaw the production and creative direction, and from the same audio team that worked on 2018’s critically acclaimed Imagine – The Ultimate Collection, including triple GRAMMY®-Award winning engineer Paul Hicks and mixers/engineers Rob Stevens and Sam Gannon, the Ultimate Collection puts listeners in the center of the studio and explores the album’s 1970 recording sessions at EMI Studios 2 & 3, Abbey Road along with John’s post-Beatles singles, “Give Peace A Chance,” “Cold Turkey” and “Instant Karma! (We All Shine On).”

From inception to the final master, the sessions are explored through scores of unreleased and rare demos, rehearsals, outtakes, jams and studio conversations, revealing how these beloved songs came to be. Everything in this expansive box set has been newly mixed from scratch from brand new 192kHz/24bit hi-res transfers. In addition to the various new mixes, the set boasts 87 never-before-heard recordings.

The Ultimate Collection offers a variety of new listening experiences that are at once immersive and intimate, ranging from the brand new Ultimate Mixes of the timeless album, which put John’s vocals front and center and sonically upgrade the sound, to the Elements Mixes, which isolate and bring forth certain elements from the multitrack recordings to reveal even deeper levels of detail and clarity, and the Raw Studio Mixes, which allows listeners to experience the moment John and the Plastic Ono Band recorded each song, mixed raw and live without effects, tape delays or reverbs. The Evolutionary Documentary is a unique track-by-track audio montage that details the evolution of each song from demo to master recording via instructions, rehearsals, recordings, multitrack exploration and studio chatter. The Blu-rays present an array of listening options including high-definition, studio quality 192kHz/24bit audio in stereo and enveloping 5.1 Surround and Dolby Atmos mixes.

Fans around the world are invited to listen to the new mixes of John’s landmark solo album, John Lennon/Plastic Ono Band – The Ultimate Mixes, together on Saturday, April 24 at 10 am PDT/1 pm EDT/6 pm BST as part of Tim’s Twitter Listening Party, the acclaimed interactive listening experience created and hosted by Tim Burgess (The Charlatans UK).

Visit TimsTwitterListeningParty.com for details about how to join and stay tuned for more info that will be revealed closer to the date at johnlennon.com

The historical, remixed and remastered John Lennon/Plastic Ono Band – The Ultimate Collection features 159 tracks across six CDs and two Blu-ray audio discs for more than 11 engrossing hours of music and includes two postcards (“Who Are The Plastic Ono Band?” and “You Are The Plastic Ono Band”) a “War Is Over!” poster and a comprehensive 132-page hardback book with lyrics, rare photos, tape box images, memorabilia and extensive notes.

Designed and edited by Simon Hilton, the Compilation Producer and Production Manager of the Ultimate Collection series, the book tells the story behind each of the songs and the making of the album in John & Yoko’s words and the words of those who worked alongside them, through archival and brand new interviews.

Yoko writes in the preface of the book: “With the Plastic Ono Band albums, John and I liked the idea of this really raw, basic, truthful reality that we were going to be giving to the world. We were influencing other artists, giving them courage, giving dignity to a certain style of vulnerability and strength that was not accepted in society at the time. It was a revolution for a Beatle to say, ‘Listen: I’m human, I’m real.’ It took a lot of courage for him to do it.”

This truly unique expanded edition includes the lively improvised jams John and the band would play between takes, belying the intense subject matter of the album, and the full live recording session of Yoko’s companion LP, Yoko Ono/Plastic Ono Band, which for the first time presents the songs in their full, unedited lengths and speed, and includes three unreleased improvisations.

Plastic Ono Band will also be released in concurrent multiple physical and digital configurations, including as a 1CD that includes the Ultimate Mixes of the original album and the three non-album singles and as an expanded 2CD or 2LP version that adds a disc of outtakes of each song.