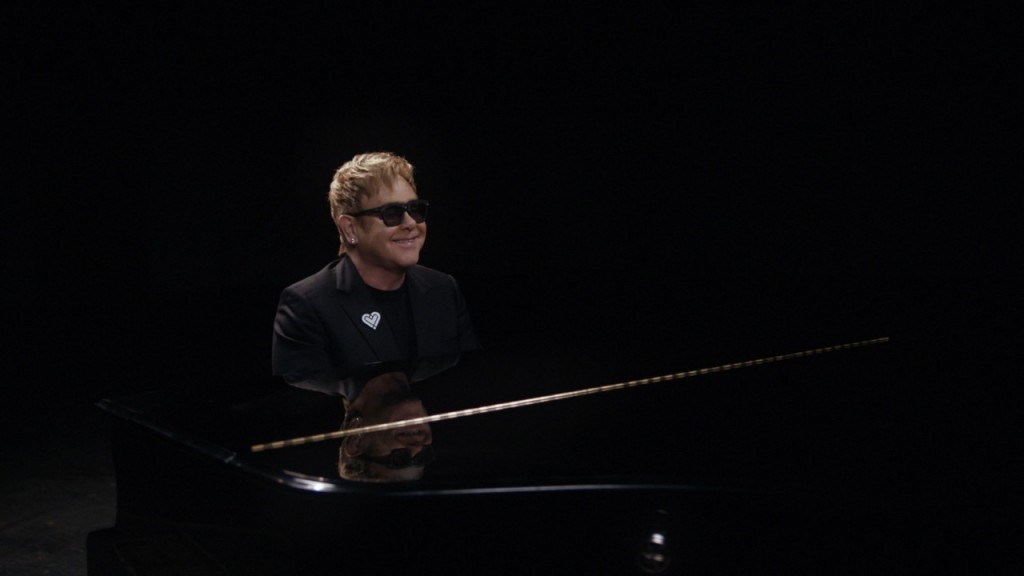 ELTON JOHN’S NEW SINGLE “A GOOD HEART” IS OUT NOW AND IS ACCOMPANIED BY A SHORT AND TOUCHING FILM ABOUT LOVE IN ITS MANY FORMS; THE VIDEO IS CENTRED AROUND A SPECIALLY SHOT PERFORMANCE OF THE SONG, THE FIRST TIME ELTON HAS APPEARED IN HIS OWN VIDEO FOR ELEVEN YEARS.

ELTON IS WEARING A PIN BADGE FROM HIS INSPIRATIONAL CLOTHING/ACCESSORIES COLLABORATION WITH LADY GAGA, “LOVE BRAVERY”, WHICH WAS CREATED TO INSPIRE COMPASSION AND COMBAT PREJUDICE.

A SPECIAL WEBSITE WWW.LOVEBRAVERY.COM INCLUDES A FILM OF ELTON AND LADY GAGA DISCUSSING THE POWER OF POSITIVITY

Of the new single, Elton John says – ‘At this time in all our lives, when the world is changing so rapidly and we’re all trying to make sense of everything, I think it’s important to remember that it’s not politicians, it’s not money and it’s not fame which make the world go round – it’s love. It’s something that is so easy to forget. I wanted to reflect that in this song and video’.

Taken from his latest album ‘Wonderful Crazy Night’, Elton John’s new single “A Good Heart” features an accompanying video where the singer reminds us of the power of love.

The video for one of the most poignant and powerful song’s on Elton’s current album, features explorations and depictions of love in its many forms – that of lovers, friends and family members.

It’s the first time Elton has appeared in his own video for eleven years. He was shot performing the song in a studio in London.

“A Good Heart” was directed by Daniel Kragh-Jacobsen.

In the film Elton wears a pin badge depicting “Love Bravery” which is his and Lady Gaga’s limited edition range of inspirational clothing and accessories, produced to inspire compassion and combat prejudice. The range is available online at macys.com and at Macy’s stores in the US, as part of their American Icons campaign. 25% of the purchase price benefits Lady Gaga’s Born This Way Foundation and the Elton John AIDS Foundation.

A special website www.lovebravery.com has been set up to promote the message of compassion and positivity. The website features a video where Elton and Lady Gaga discuss this subject along with a mechanic which shows how often negative messages are posted on social media. The message is:

MAKE THE WORLD A KINDER AND BRAVER PLACE

Every minute on Twitter someone is bullied with words such as bitch, idiot or loser.

Elton is in the middle of a hugely successful tour of UK, Europe and Russia, which ends in mid July in Italy. He will subsequently play a US tour, including a number of dates in Las Vegas and also headlines a special show at London’s Hyde Park on Sep 11 for Radio 2’s Festival in a Day.