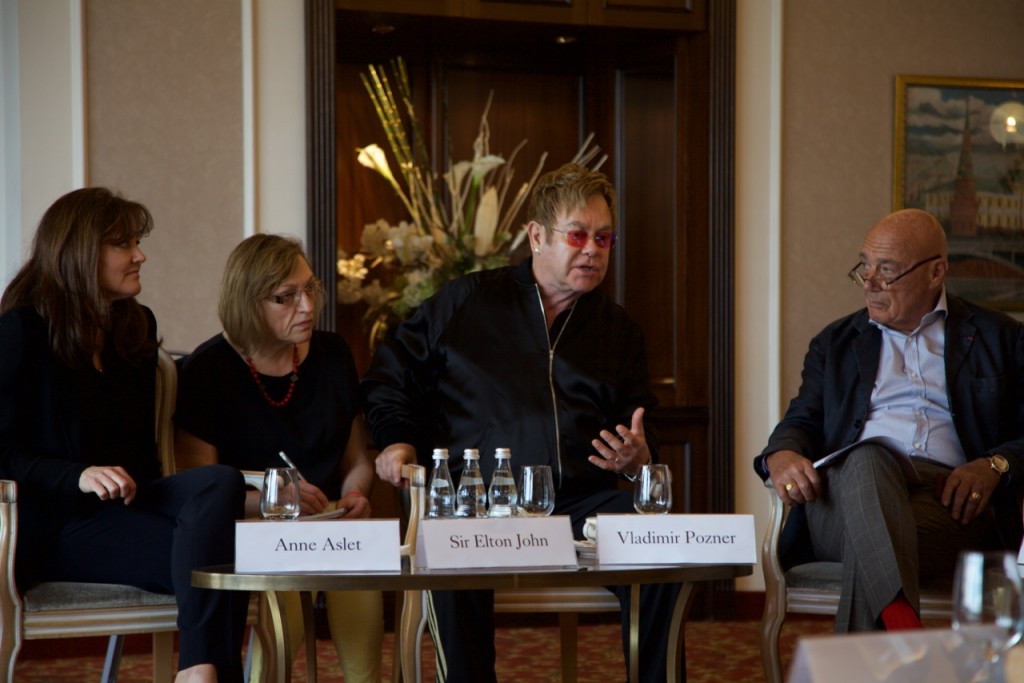 Elton John made a heartfelt message from the stage at his concert last night in Moscow:

‘So wonderful to be back in Moscow on such a beautiful evening! ‘ said John, who first performed in Russia in 1979. “I always feel so welcome when I come here – thank you!’

‘As some of you may know, I had hoped to meet with President Putin on this trip. Although it wasn’t possible, I’m deeply grateful to him for inviting me to discuss some serious issues in Russia, including LGBT rights and HIV. I very much hope we will find the time to meet in the future.’

The singer’s visit came shortly after a series of activities in schools and colleges across Russia to raise awareness of the country’s AIDS epidemic, which could be as high as 1.3m cases.

In his message, Sir Elton commended Svetlana Medvedeva, wife of the Russian Prime Minister Dmitry Medvedev, for helping to raise national awareness about HIV and AIDS in recent weeks. “A dialogue of compassion is truly what is needed to end the AIDS epidemic” he said.

Earlier in the day John, whose AIDS Foundation has supported over 20 projects projects in Russia, met with key figures involved in the country’s growing HIV epidemic including Natalia Ladnaya, Snr Expert of the Russian Federal AIDS Centre; Evgeny Pisemsky, head of the NGO Phoenix Plus, Andrey Skvortsov who heads the Russian branch of the Int’l Treatment Preparedness Coalition and Maria Godlevskaya of the NGO ‘EVA’ which supports women living with HIV across the country. Senior representatives from UNAIDS and Human Rights Watch were also at the meeting, which was chaired by famous Russian journalist and author Vladimir Pozner.

“I hope to be in Russia again, and often, and to be helpful in any way I can in helping to create an AIDS free future for Russia. Thank you!” John concluded from the stage.

On leaving Moscow last night, John noted that for the first time a meeting of Russia’s National Security Council is scheduled in the coming weeks to discuss the country’s AIDS epidemic, chaired by President Putin.

The Elton John AIDS Foundation (EJAF) is dedicated to reducing the spread of HIV/AIDS through innovative HIV prevention programmes, eliminating the stigma and discrimination associated with HIV/AIDS and supporting direct care for people living with HIV/AIDS.

Together with its sister office in the U.S. it has raised nearly £220m since it was founded by Sir Elton John 23 years ago and reached over 150 million people across four continents. We work with local, national and international organisations to provide non discriminatory HIV information, testing and treatment services that stop people becoming infected with HIV or getting sick and dying of AIDS. This has meant funding some 1,500 programmes including providing over 20 million HIV tests, and treatment prevention for more than 800,000 pregnant woman living with HIV so that they could protect their babies from the HIV virus.  The Foundation also prioritises those who are highly vulnerable to HIV and the stigma that surrounds it in many parts of the world such as men who engage in male-to-male sex, people who use drugs and people who sell sex. In the UK the Foundation has supported HIV services at range of HIV treatment centres and hospitals including St Mary’s Paddington, Chelsea & Westminster, Brighton General, Ealing, the Royal Free and University College Hospital (UCH). It is also the leading independent funder of the Hardship Fund for people living with HIV in the UK and of www.myHIV.org, both administered by Terrence Higgins Trust. Since its inception, the Foundation has given more than £15m in the UK to over 200 organisations that serve people living with or at risk of HIV across England, Scotland, Wales and N. Ireland and Eire.