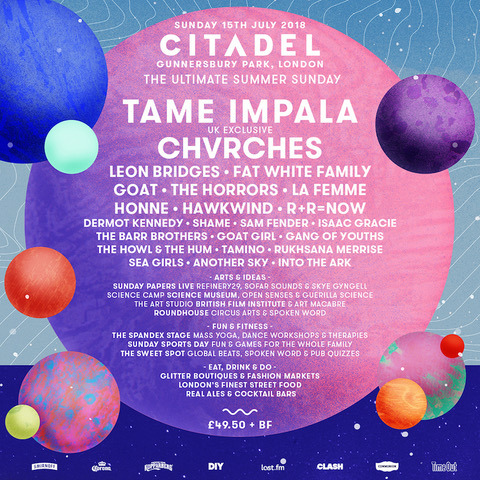 “A kaleidoscopic musical landscape” – The Guardian

One of London’s brightest new festivals return to do what they do best: the ultimate summer Sunday.

There’s also the colourful array of experiences, activities and workshops to get involved with, spanning from science and art classes, fun fitness & wellbeing, to talks and debates. The Science Camp, Spandex Stage, Art Studio and Sunday Papers Live are amongst those venues returning.

The unstoppable CHVRCHES join us at Gunnersbury Park as a London Festival Exclusive. The Glaswegian trio burst onto the scene in 2013 with their certified-Gold debut album The Bones of What You Believe, which spawned a massive seven singles – the epic synth-pop of ‘The Mother We Share’, ‘Recover’ and ‘Gun’ were unavoidable, dominating the radio and charts.

Follow-up Every Open Eye secured CHVRCHES’ place as one of the most intriguing and exciting voices in UK pop – and now, they’re set to release the third album, Love Is Dead. Lead single ‘Get Out’ is very promising indeed…we can’t wait to see them perform brand new material as well as old favourites at Citadel.

Also joining us are south London’s finest, Fat White Family, as a London Exclusive. Their confrontational brand of experimental rock, post-punk and outspoken views have made them stand out in an often-crowded musical landscape.

Elsewhere, there’s super-cool French psychedelia outfit La Femme (London Exclusive), whose enigmatic yet accessible brand of wonky rock and roll have earned them nods from The Guardian and Dazed, the prolific The Horrors, whose experimental take on indie rock and post-punk has seen them dance around genres to become one Britain’s finest exports.

Shame have been lauded as Britain’s ‘most exciting new band’ thanks to their debut album, Songs of Praise, which received a wealth of critical acclaim immediately upon its release. They’re not to be missed at Citadel. There will also be an appearance from mysterious new band Another Sky.

We’re thrilled that our friends at Communion will be joining us in Gunnersbury Park. Originating in Notting Hill in 2006, their influence has spread worldwide thanks to an impressive roster (that includes Bear’s Den, Lucy Rose, Catfish And The Bottlemen and many more) and a firmer than ever focus on artist development.

Leon Bridges headlines the Communion stage this year as a London Festival Exclusive. The young gospel singer first played at Citadel at our first edition back in 2015. Three years later and he’s a global phenomenon, with many citing him as the leader of the soul revival and comparing him to greats such as Sam Cook and Otis Redding. Leon Bridges has his own, distinctive voice though – as demonstrated on his Grammy-nominated debut album Coming Home. We can’t wait to see him back at Citadel.

Elsewhere there’s a London Exclusive performance from electronic duo Honne. Their unique, futuristic take on neo-soul has seen them ascend to one of the biggest names in UK electronica. Hotly-tipped UK singer-songwriter Isaac Gracie makes his Citadel debut, as does Ireland’s Dermot Kennedy. His introspective and refreshingly honest songs have amassed over 50 million streams across the globe.

Meanwhile on the Clash & Last.fm stage, a UK Exclusive headlining performance from a truly one-of-a-kind act. GOAT are the definition of experimental; a mask-wearing, genre-fusing group hailing from Sweden who twist rock (and all its subgenres) on its head in the most bafflingly brilliant of ways. They’re a force to be reckoned with live, and we can’t wait to welcome them to Gunnersbury Park.

One of the originators of space rock, Hawkwind, join us. Formed in 1969, Hawkwind are true innovators and their live performances are famously ambitious.

We’re delighted to have Robert Glasper and Terrace Martin’s new project R+R=NOW perform at Citadel as a UK Festival Exclusive. These modern jazz icons will be joined by a clutch of incredibly talented musicians, including jazz trumpeter Christian Scott, bassist Derrick Hodge, drummer Justin Tyson and multi-instrumentalist Taylor McFerrin. Expect a fusion of genres and a lot of soul.

Also performing on the Clash & Last.fm stage is Sam Fender, the fast-ascending singer-songwriter who appeared on BBC’s Sound of 2018, the much-talked about Goat Girl (signed to Rough Trade), Australian indie-rockers Gang of Youths, newcomers Sea Girls (championed by Huw Stephens), and Welsh duo Into The Ark.

Heading to Citadel in 2018 will be Kopparberg Outsider: a space without barriers at this year’s Citadel. Kopparberg will be pioneering the very best in creative and imaginative live music, by hosting a series of trailblazing artists and DJs on its renowned Outsider stage.

The Corona SunSets stage returns, bringing the smooth beats of the Balaerics to Citadel. Join the tribe and follow the Corona procession to the ultimate celebration of the sunset. Embrace the spirit of summer as night approaches. Watch the stage come to life as colours dance across the sky. Stay tuned for another amazing line up of sun-soaked sounds.

Music is just one pillar of Citadel. We are proud and happy to offer a galaxy of activities and experiences, included in your ticket and the perfect accompaniment to your summer Sunday soundtrack. Talks and debates, food and drink from London’s vibrant restaurant scene, sports, wellbeing, workshops, arts and crafts are all ready and waiting for you to interact, engage, or simply observe.

Returning to Citadel are favourites Sunday Papers Live, who will once more bringing the broadsheets to life with a rousing assortment of speakers, politicians and comedians to discuss the news, from the biggest stories to the silliest tidbits. Sink into a sofa, grab a drink and watch it all unfold.

A revered selection of partners and speakers will be perching on the sofas, including Sofar Sounds, Refinery 29, Apples & Snakes, Skye Gyngell and Frontline Club.

The Science Camp returns to Citadel for the second year with an out-of-this-world array of scientific experiments and explorations. Discover a diverse programme of fun workshops, silly experiments & stand-up comedy to expand your mind. Made up of guest speakers, scientists, artists & acclaimed institutions.

The iconic Science Museum is back, bringing a taste of their ground-breaking exhibition Superbugs. Discover the innovative technologies being used to make superbugs a thing of the past.

Guerilla Science will once more be bringing a series of intriguing and innovative workshops and sessions to the Science Camp, including Space Yoga, Flavour Feast and Attraction Lab. There will also be lab experiments with a twist at Chemistry Classes For Adults, plus OpenSenses & Bittersuite will be back at Citadel with guest speakers.

One of London’s musical institutions, the Roundhouse, will be joining us at Gunnersbury Park with an inspired selection of circus arts and spoken word.

Explore your creative side at The Art Studio where you can make, design, create and play. 2018’s workshops include An Introduction to Filmmaking with the legendary British Film Institute, Find Your Inner Cartoonist with Harry Venning, Put The Design In The Coconut with Christabel’s, and Life Drawing with Art Macabre.

That’s your brain satisfied…time to take care of your body. There’s The Spandex Stage, where you can find the usual wonderfully diverse selection of dance workshops and fun fitness – and where the annual Citadel Mass Yoga session takes place. The infamous Citadel Sports Day, will of course be coming along for the ride to Gunnersbury Park, featuring its most-loved sporting endeavours, including Space Hopper Races, Volleyball Tournaments, Badminton Matches, Pogo Races, Tug of War, Sack Races, Ping Pong and much more. Complete with a splattering of comedy comperes, pitch invasions and hip-hop cheerleaders.

Little ones will be entertained at the Kids’ Camp, which plays host to Little Angel Theatre, Nick Cope Sing-A-Long, Picassos In The Park, Superhero Academy, plus Ben Gates’ Sound Garden, along with soft-play and storytelling.

There will also be some of London’s best independent creatives and makers in the Park – fashion markets and glitter boutiques will all be ready and waiting for you to don your festival finest.

To keep you fuelled throughout the ultimate summer Sunday, there’ll be a veritable feast of the finest food and drink from some of most exciting names in the UK restaurant scene, catering to all dietary requirements including vegan, vegetarian and gluten-free. Tuck into street food, real ales and cocktails. Sharp’s Brewery return with the secret crate experience to indulge your senses with ale and food pairings.

Meanwhile, to celebrate this year’s epic festival season, Smirnoff, the world’s most popular vodka brand, is proud to be the official vodka and partner with the biggest festivals across Europe including Citadel.

The sheer depth and breadth of what’s on offer at Citadel makes it a standout amongst the city’s one-dayers. Have you discovered the Citadel galaxy yet?