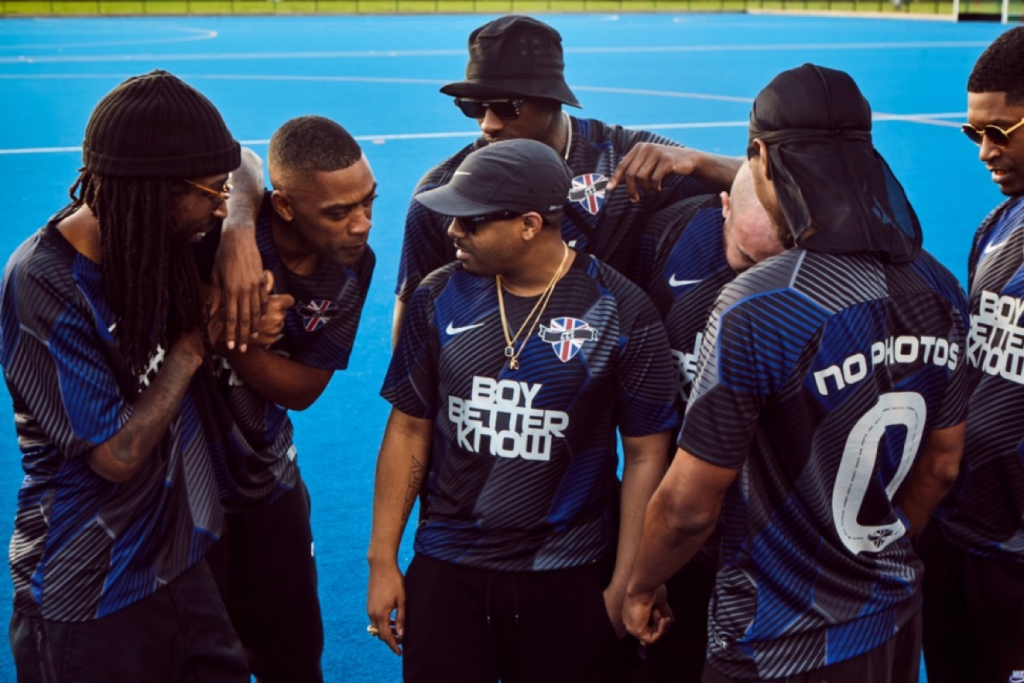 BOY BETTER KNOW, ALSO KNOWN AS BBK, WILL PICK UP THE INCREDIBLE AWARD IN PERSON AT THE ANNUAL AWARDS CEREMONY ON FEBRUARY 14TH AT LONDON’S O2 ACADEMY BRIXTON

THE VO5 NME AWARDS 2018 WILL BE STREAMED VIA FACEBOOK LIVE

Today, 8th February, NME is thrilled to announce that much-respected underground music collective Boy Better Know, shortened to BBK, will be honoured with the NME Innovation Award at the VO5 NME Awards 2018. Members of the collective will be picking up the award at the annual ceremony at London’s O2 Academy Brixton on 14th February.

Founded in 2005 by brothers turned unofficial poster boys of grime Skepta and JME, BBK have undoubtedly become one of the most important and prominent music collectives in the UK. Although closely associated with grime music from its roots, the label represents artists creating music with diverse influences from garage, dancehall and hip-hop. BBK have developed a reputation for becoming a force of nature, remaining independent from major label intervention and driving some of the largest moments in grime history with monumental singles such as their 2009 underground hit ‘Too Many Men’ and Skepta’s 2014 track ‘That’s Not Me’ which re-ignited the London grime scene.

After a highly-successful first year of live streaming with over 11.6m people tuning in at home, fans will be able to get close to the action again this year by watching the stream live via NME’s Facebook at www.facebook.com/nmemagazine/. Last year’s live stream received 1.8m video views and had 80,000 reactions on Facebook.

“Boy Better Know have been instrumental in shaping the UK Grime scene over the past decade, and we’re thrilled to be able to honour them with the NME Innovation Award this year.

From nurturing fresh new talent to packing out festival fields with their live shows, BBK never stand still and have undoubtedly become one of the most respected and well-loved music collectives the UK has produced.

With the V05 NME Awards streaming live on Facebook again this year you can catch the whole thing as it happens. It’s going to be epic”

Today’s announcement follows the exciting news that Garbage’s Shirley Manson will be honoured with the NME Icon Award at the VO5 NME Awards 2018, Pale Waves will receive the first NME Under The Radar award and the earlier news that Liam Gallagher will be awarded with the legendary Godlike Genius Award. The remaining awards are fan-voted with the winners revealed at the official annual ceremony.

This year’s VO5 NME Awards will be taking place at the iconic O2 Brixton Academy and will play host to incredible performances by Mercury Prize-winning and Grammy-nominated band Alt-J, hotly tipped newcomer Stefflon Don alongside grime pioneer and BBK co-founder Skepta, NME Under The Radar award winner Pale Waves, and Godlike Genius award winner Liam Gallagher, who will close the ceremony with a montage of career-spanning hits.

The VO5 NME Awards Show Tour and VO5 NME Awards Road Trip are in full swing with shows still to come by Franz Ferdinand, Peace, Superfood, Yonaka and many more. Tickets can be purchased via Ticketmaster.co.uk and Seetickets.com.

About NME:
NME is one of the UK’s most famous and influential youth brands, turning young people on to the music and culture that will change their lives since 1952.

Initially a weekly newspaper, NME now reaches 10 million people via the website, and another 150 million via social and offsite distribution, video channels, live events and the free weekly magazine.

NME is celebrated for talking about music and being experts in the field, but that’s only on part of the story. Whether it’s film, TV, food, politics, career development, social issues or Pokemon, if the NME audience is into it, NME is all over it.

From #lifehacks to Eats & Beats to the world-renowned NME Awards, NME has a growing portfolio of channels, events and franchises that help us deliver timely and relevant content to the NME audience and connect commercial partners with this switched on and savvy generation.

About the NME Awards:

Heads Up: At VO5 we believe hair shouldn’t be dull, life shouldn’t be boring and you should never restrict your self-expression. We encourage our stylers to have their hair in constant beta mode, to experiment, fail and learn but never leave it as it is. We want to create a world of hair play!