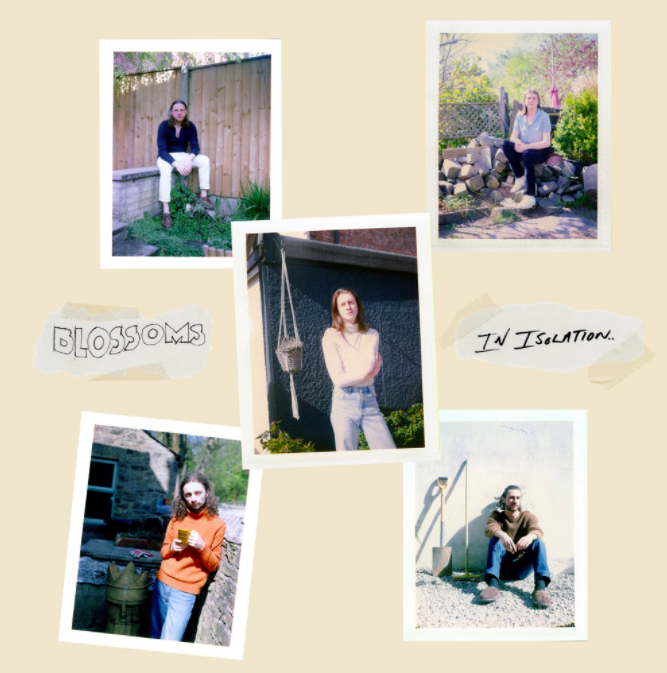 Blossoms have today announced their new album, Blossoms In Isolation. The album is made up of cover versions and re-workings of their own songs, recorded by the band at their respective homes during this period of isolation. The first track to be released from the album is their cover of Frank Ocean’s Lost, out now.

Over the coming weeks the band will be releasing isolation versions of their Beatles Paperback Writer cover, described as ‘superb… our favourite isolation cover yet’ by Music Radar, as well as covers of The Coral’s Dreaming Of You, in collaboration with James Skelly and Tame Impala’s The Less I Know The Better with Miles Kane.

Further isolation collaborations will be revealed soon and the band will also release versions of their own tracks My Swimming Brain, There’s A Reason Why (I Never Returned Your Calls) and If You Think This Is Real Life. Release date and full tracklisting will be announced very soon.

Blossoms current album Foolish Loving Spaces went to Number 1 album in the UK album charts on its release in January and features singles The Keeper, If You Think This Is Real Life and Your Girlfriend. The band have also recently announced the release of a live album, ‘Live From The Plaza Theatre, Stockport ‘. Due out July 3rd the album follows the order of the set list from their show at the Plaza on February 11th this year.

Since forming in 2013, Blossoms have enjoyed widespread success and acclaim. Their 2016 debut full length topped the album charts for two consecutive weeks and went on to earn the band BRIT Award and Mercury Prize nominations, while 2018’s Cool Like You charted at number 4 in the UK album chart, spawning the anthemic singles I Can’t Stand It, There’s A Reason Why (I Never Returned Your Calls) and How Long Will This Last?