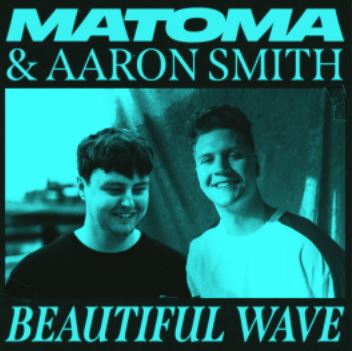 “We already can’t get enough.” – Wonderland

“Be prepared to fall in love.” – Euphoria

Norwegian DJ and producer Matoma’s new single ‘Beautiful Wave’ featuring Scottish singer-songwriter Aaron Smith is out now. Showcasing his trademark soaring vocals, Smith contributes an earnestness that carries the listener on a journey from heartbreak to learning to fall in love again.

Speaking about the collaboration, Aaron says:

“When I was first asked to work with Matoma on a track I felt very grateful for the opportunity. To find out it was being released as a single shortly after we wrote it meant Matoma was as excited about it as me but I tried to keep cool! This is a step away from my usual brand of sad songs and it has been a privilege from start to finish to work with Matoma and his team on this. Can’t wait to perform it live one day with him!”

“Inspiration, like the elements in nature, is fluid, powerful and random. You never know where it comes from, how it affects you, or where it takes you. And that’s always the same with my music. I don’t want to release the same song 20 different ways. I go with the flow. Aaron’s heart-breaking voice and the storytelling we wrote with Gez (O’Connell) just swept me away into this new sound!”

‘Beautiful Wave’ follows Smith’s recent single ‘Nocturnal’, his first release since his 2020 EP “For My Father”. It also marks the third in a series of forthcoming single releases from Matoma, who is newly-independent. Following previous singles ‘Never Surrender’ featuring Steve Garrigan of Kodaline and ‘Summer Feeling’ featuring Jonah Kagen, which scored record numbers of streams in their first week, Matoma is proving time after time that he is a force in the current electronic world. Matoma recently appeared on the Norwegian version of ‘The Voice’, coaching country singer Erlend Gunstveit to victory. Matoma’s 2018 debut album, ‘One in a Million’, has accumulated over a billion streams since its release, featuring hits like ‘All Night (feat. The Vamps)’ and ‘False Alarm (feat. Becky Hill)’.

Since the release of his debut single ‘Unspoken’ in 2019, which took the top spot on both Apple Music’s Best of the Week and Spotify’s UK New Music Friday playlists, Smith has gone on to garner widespread acclaim for his distinctive vocal style and intimate, soulful sound, with 64 million lifetime steams of his music to date.

Following his meteoric rise, the pandemic gave Smith the opportunity to pause and take stock, re-connecting with life’s simpler pleasures as he began writing new music from his home in Scotland. Hot on the heels of a rousing performance at Glasgow’s TRNSMT, Aaron made a highly-anticipated return to the scene with the release of ‘Nocturnal’ this September, his first new music since his critically-acclaimed second EP, ‘For My Father’, in August 2020.

Since making his debut in 2015, Matoma has joined the ranks of electronics’ most popular and innovative new stars, prompting Rolling Stone to declare him the “leader of tropical house’s next big wave.” Born Tom Lagergren, Matoma scored a breakout success in 2015 with his RIAA gold-certified single, Matoma & The Notorious B.I.G’s “Old Thing Back (feat. Ja Rule & Ralph Trevisant),” featured on the groundbreaking 2015 debut album project, Hakuna Matoma. Since then, Matoma has made waves with life-affirming originals (including the smash “Running Out”) alongside cross-genre collaborations with the likes of Jason Derulo, Jennifer Lopez, Dua Lipa, and The Vamps as well as a dazzling array of remixes for artists as varied as Coldplay, One Direction, Snoop Dogg, Eminem, and Sean Paul, among others.

Matoma’s journey reached a landmark moment with the release of 2018’s acclaimed debut album, “One In A Million”, which has garnered over 1 billion streams worldwide. Hailed by Billboard as “a fresh collection of varied dance-pop compositions…heavy with feels from start to finish…(and) poised for pop-crossover success with some stirringly emotional moments and dance floor feelings,” the album includes a quartet of worldwide hit singles, including ‘False Alarm (Feat. Becky Hill),’ ‘Lonely (feat. MAX),’ ‘Slow (feat. Noah Cyrus),’ and ‘All Night (feat. The Vamps),’ all of which have now amassed over a billion total streams and counting.